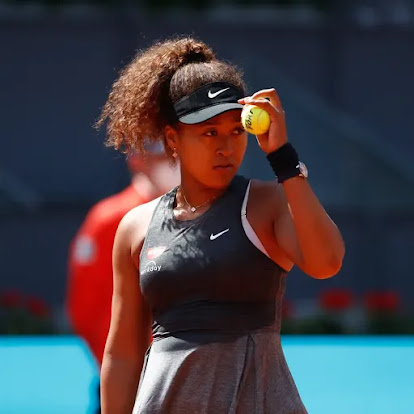 In the last several days, I have been reading a lot about Naomi Osaka, a professional tennis player. In fact, she is not just any tennis player, either. As Wikipedia tells us, Osaka has been ranked No. 1 by the Women's Tennis Association (WTA) and is the first Asian player to hold the top ranking in singles. Osaka is pictured, above, and a story in The New Yorker provides more information about her stellar career:

In 2018, during the U.S. Open trophy presentation, after a match marred by controversy surrounding a confrontation between Serena Williams and the umpire. The crowd, which had been on Williams’s side, booed as Osaka was named the champion. Osaka cried, and tried to hide her face. She was twenty years old then, already launched into a life that everyone could see and that no one could possibly imagine. Over the next three years, Osaka won three more Grand Slams, and the publicity surrounding her career and her life grew even more intense. Her image was on the cover of Vogue and on billboards towering over Los Angeles and Tokyo. She became an icon, and she did iconic things. She helped design sneakers for Nike, a salad for Sweetgreen. In May, Sportico estimated that she had earned more than fifty million dollars during the previous year, which made her the highest-paid female athlete in history... A recent Times feature about her ran under the headline “How Naomi Osaka Became Everyone’s Favorite Spokesmodel.”

I am not an avid sports fan, and I didn't really know much about Osaka until Tuesday, June 1, 2021, when The New York Times devoted a full page to Osaka in its "SportsTuesday" section. June 1, 2021, is also when The New Yorker ran that story from which I have already quoted. Osaka was "big news" in the world of sports on Tuesday, because of her decision to withdraw from the French Open, and particularly because of the reason she decided to do that. Osaka announced before her first match that she would refuse to take part in a press conference following the match - and then she followed through. Here is how The New Yorker explained events:

It is not, in fact, unusual for players to skip press conferences—particularly players who can afford to pay the resulting fines. What was unusual was the decision to opt out of them entirely, ahead of time, and to publicly question the rules and practices surrounding them. Osaka also sent a private e-mail to French Open officials apologizing for any affront and saying that she would like to “work with the Tour” to set up a new system once the tournament was done. But the officials at all four Grand Slams treated both this e-mail and her initial statement as existential threats. After trying and failing to engage with Osaka, they said, they issued a joint statement to publicly warn her that the penalties would escalate if she maintained her stance and that she could be expelled from the tournament. Within a day [given those threats], she pulled out.

As already indicated, I am not much of a sports fan, though I certainly knew Osaka's name, and knew that she is a great tennis player. What surprised me, as I started reading all the stories, was that refusing to participate in a post-tournament press conference could bring down so much wrath upon Osaka that she felt the need to withdraw from the tournament to protect her mental health.
As it turns out, which I didn't know, tennis players who participate in these major tournaments bind themselves, contractually, to subject themselves to the press. Osaka's announcement, thus, was seen as an "anticipatory breach" of contract, to use a legal term, and when she made good on her plan and skipped that first post-match press conference, "existential wrath" did pour forth.
Several other tennis professionals, including former tennis champion Billie Jean King, indicated that Osaka was refusing to "do her job," and little sympathy was shown to Osaka in the immediate aftermath of her decision to withdraw from the French Open. In fact, The Times article implied that Osaka was, essentially, a "bad sport," and was trying to obtain an unfair advantage over other players, who would have to endure the press conferences, while Osaka would skip them, and then use the time not spent with the press to relax, all the better to prepare for her upcoming matches.
The continuing coverage of this matter has now begun to stress how courageous and brave Osaka has been to bring up, publicly, the kind of stress that professional athletes can experience, and to suggest - or even demand - that those in charge of these major tennis tournaments pay attention to and accommodate the athletes' need to protect their mental health. The Wall Street Journal, in fact, has said that what Osaka did has "reignited a conversation that is reshaping pro sports."
I think that forcing sports organizations to pay attention to the mental health-related issues experienced by professional athletes is a good thing, and I was pleased to see that Stephen Curry agrees. (While I am not much of a sports fan, I do follow the Golden State Warriors!) However, what struck me most in the events just described was the fact that the "job" of a professional athlete is apparently not just to play hard and try to win. That, too, of course, but I was amazed to find that a tennis champion's legally defined "job" includes - as a contractual commitment - talking to sports writers and other media types, and enduring their questions and suggestions.
Non-sports fan that I am, I have always naively supposed that the "job" of a professional athlete was simply to train and participate and try to win in whatever sport in which the athlete was involved. If the press and media are interested, as of course they are, because the public is, the burden of "covering" the stories generated within professional sports should be on the press and the media, not on the athletes whose successes and failures are the "news" that the press and media will bring to the public.
That is, apparently, not the way it is, so professional athletes are actually "working" for the corporate, wealthy interests that use sports to make their money, and the owners are telling the athletes not only that they need to be winners, to keep their employment, but that they need to "flak" for the sports entities that stage the contests in which they are involved.
As the Osaka story continues to unfold, I hope that the mental health needs of professional athletes will, indeed, get more consideration. That is what the most recent news articles suggest might happen. A New Yorker article published yesterday, in fact, asks "What if Pro Sports Leagues Were Controlled By Their Players?" That sounds like a good idea to me. If that were true, "taking a knee" during the playing of the National Anthem might well not result in an athletic death penalty, as it did for Colin Kaepernick.
As professional athletes think about that possibility, I suggest there should be a reevaluation of the idea that an athlete can or should be contractually bound to talk to the press, whether that athlete wants to talk to the press, or not. Somehow (non-sports fan that I am), that just doesn't feel right to me. While expressed in more general terms, I was delighted to see that the Thursday edition of The New York Times ran an Op-Ed column by Lindsay Crouse that more or less makes this same point. The column's title? "The Power of 'Nope.'"
Meet the press, athletes? Only if you feel like it!
Image Credit:
https://www.glamour.com/story/naomi-osaka-just-took-a-major-step-to-protect-her-own-mental-health