The print, above, titled "Peasant Revolt," illustrates an article published by Organic Radicals. The article is titled, "The Great Battle For The Future." The Organic Radicals' logo appears below:

The photo at the bottom of this blog posting came from The Acorn, an Organic Radical bulletin published by Winter Oak. Winter Oak is a not-for-profit organization, located in Great Britain. The Winter Oak photo is contemporary, and shows a battle on the streets of Amsterdam, heading an article titled, "The Breaking Point Draws Near."
Organic Radicals and Winter Oak have a rather apocalyptic view of our current situation. Here is how the "The Great Battle For The Future" begins:

A nightmare totalitarian industrial world, in which everything living is being poisoned to death and in which dehumanised people are subjected to full-spectrum physical and psychological control by slave-masters they never dare question.
So here is where the modern world and its self-mythologising cult of “progress” was leading us… Who’d have thought it, eh?
The warnings have been there, of course, whether from science fiction writers and filmmakers (They Live!, The Terminator, Equals...), musicians or the dozens of thinkers featured on this website.
They warned us where this would end up if we didn’t do something, but we collectively spurned their advice and here we are, on the very brink of a long-term and probably fatal dystopia.
The important question now is how we are going to get out of this global hi-tech concentration camp.
Part of the answer is that we need to keep alive, and spread as widely as possible, a vision of how the world could be, of another way of living which is utterly different from the sterile and robotic hell currently lined up for us and those who will come after.

The tone of the Winter Oak article is similar:

A year after the start of the Covid crisis, the fault lines of major social conflict are becoming apparent.
On the one side, authorities are ramping up the repression as they seek to push us all permanently into their New Normal of techno-fascist global slavery.
On the other side, as the Great Reset agenda becomes more widely noticed and understood, resistance is growing, albeit largely under the radar of corporate media subservient to the dictatorship.
“Europe is in revolt against lockdown. Protests, riots and civil unrest have broken out across the continent. People are starting to reach breaking point,” says this February 2021 report by Paddy Hannam of Spiked Online.
Dutch people reacted angrily and courageously against a police-state curfew imposed on their country for the first time since it was occupied by the (original) Nazis.
Youths torched a COVID-19 testing center and threw fireworks at police in the fishing village of Urk, reports DW.
“Police in the capital of Amsterdam also used a water cannon to disperse an outlawed anti-lockdown demonstration on a major square ringed by museums,” adds AP.
John Jorritsma, mayor of Eindhoven, where major riots broke out, warned: “We’re on our way to civil war”.

The Organic Radicals statement of principles is certainly consistent with the articles I have excerpted above:

In broad terms, organic radicalism is a political ideology deeply opposed to industrial capitalism.
Its vision of human society is based not on money, greed, property and authority but on mutual aid, co-operation, freedom and community; a way of living which would restore humankind’s well-being and its harmony with the rest of nature.
Organic radicals know full well that this future will never be reached within the current social structures and therefore call for the complete destruction of the capitalist system using a full diversity of tactics.

The tactics that are illustrated by both Organic Radicals and Winter Oak, in the print and the photo included here, do not seem representative of the "full diversity of tactics" that are part of the principles. The "war metaphor" suggests that violence, in fact, will carry the day.
I beg to differ. Civil war, and violent confrontation with "the authorities" is a losing strategy. Those who believe, as I do, that apocalyptic thoughts about our current situation are called for, and that great changes are needed, should not be thinking about civil war.
Americans know that many of those who invaded the Capitol Building on January 6th were calling for or contemplating civil war. Apocalyptic voices are plentiful on all sides, here as in Europe. It is hard to believe that something as simple as "talking to strangers," talking to each other, is the real remedy, but such, I think, is actually the case. 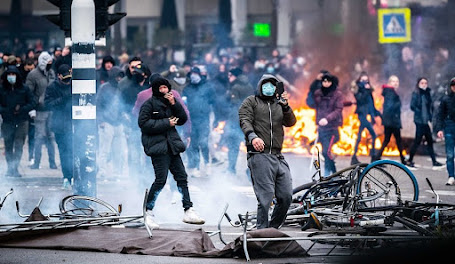