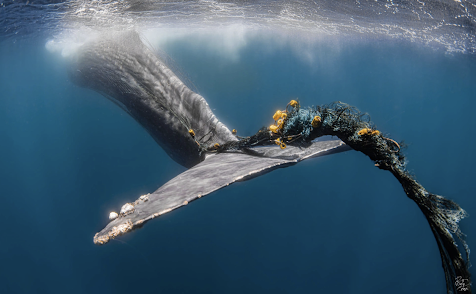 The photo above, from The Atlantic, received an Honorable Mention award in the ninth annual Ocean Art Underwater Photo Contest, organized by the Underwater Photography Guide. The photo was captioned as follows:

The Last Moments of a Sperm Whale: It was a very sad moment when we saw this sperm whale totally covered by a ghost net. The whale was trying hard to breathe, and when I approached swimming, trying to see if there was any way to help, I realized It was really difficult to do anything. After a few seconds the animal went down and a strong wind and waves forced us to leave that place. The animal wasn't found again despite the efforts of many people and authorities.

On the same day I saw this heartrending photo, I also saw an article in Boston Review. The article appeared in the magazine's "Science & Nature" section, but it was titled, "End Capitalism." It compared the fate of the whales - of a whale caught in a drift net - with our own entanglement "in a global financial system that it does not seem possible to transform."
I say, listen to these cries. Listen to them as if they came to us from the whales in their last moments. The last moments, before they disappear. These are our cries:

If we don’t end capitalism this week, it is because we are entangled, a reality that will continue to wound us after the vaquita and the North Atlantic right whale disappear off the face of the Earth.

One female North Atlantic right whale was stabbed by a propeller as a baby and didn’t die until fourteen years later when she was pregnant. As she expanded to hold life, her wound reopened, got infected, and killed her. Or think of Punctuation (this is what the researchers who have been studying this whale for forty years call her), a grandmother North Atlantic right whale who died in the summer of 2019. She had given birth eight times, survived entanglement five different times, and had scars from multiple boat strikes and propellers. And at least three of her children died from entanglement before she died. Maybe you know something about what it means to bear the constant wounding of a system that says it’s about something else entirely. It might sound hollow to you too when you hear these deaths are not the point, that these deaths are just a byproduct that cannot be prevented for the sake of the system. Surely there must be some way to improve the system that already exists.
I don’t think so. Where are the people who argue that commercial fishing is necessary for human life when the same economic system pollutes that exact food supply and raises carbon to levels that are killing fish off already?

None of these things can be separated from each other. We are all entangled. And the fact that entanglement is a slow death doesn’t make it any better; it in fact makes it more gruesome. And I mourn the parts of you that lost feeling today. I mourn the scars you will not notice until you have a reason to grow. I mourn the freedom you don’t know because these ropes have been here longer than you have been and, big or small, you can’t evade them (emphasis added).