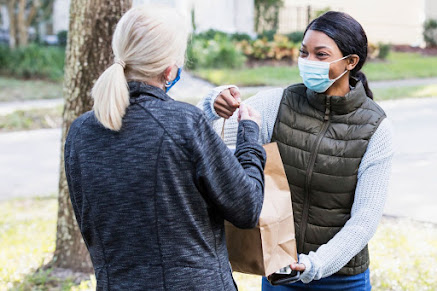 On January 20, 2021, my blog posting was titled, "Talking To Strangers #2." In that blog posting, I recommended a book authored by Danielle S. Allen, simply titled Talking To Strangers. I still recommend that book! It seems to me, in fact, that the future of our system of democratic self-government will depend, in the final analysis, on how well we are able to "talk to strangers" in the way that Allen recommends.
A column by Elizabeth Bernstein, which appeared in The Wall Street Journal on February 17, 2021, also advances a "Talk With Strangers" strategy:

Aurora Flores hadn’t gone out much during the pandemic. But recently she forced herself to take a walk in New York’s Central Park to clear her mind and seek solace in the sound of birds and a waterfall. As she was strolling down the path, another woman approached, wearing a mask. Letting out a loud yelp, the woman flung a handful of birdseed in the air.
Suddenly, a flurry of titmice, cardinals, blue jays and robins appeared, as Ms. Flores stood there amazed. The stranger offered her some seeds, and Ms. Flores poured some on her gloved hand, holding it out in front of her. One by one, the birds began to land on her fingers.
“I was elated. I felt blessed,” says Ms. Flores, 67, a writer. “She saw me beaming, and I could tell she smiled. Then she went on her way.” Now, Ms. Flores says she is motivated to go outside almost every day.
Strangers can soothe and support us when no one else is around, or boost our mood with a smile or a laugh. They can distract us from the chatter in our own head and help expand our perspective. They can make us feel connected and remind us we are not alone.

I found this little story profoundly affecting. We are, truly, united and together in this life - a life in which we find ourselves so mysteriously present - but present not alone but with others, in a world of wonder and great beauty.
But properly to appreciate and navigate this world we inhabit, we must acknowledge the wonder, and the beauty - and the pain and the perils - as we confront them and experience them together. We must do so not only to provide each other with the mutual blessing of encounter and companionship, but to discover, together, the strength and inspiration to do what we must do to sustain ourselves within the human world that we create, and within the World of Nature that has created us:

Gillian Sandstrom, a psychologist and senior lecturer in the Department of Psychology at the University of Essex, in Colchester, England, who studies interactions with strangers, has found that people’s moods improve after a conversation with someone they don’t know, such as a barista or a museum guide. She’s also discovered that people are happier on days when they have more of these types of interactions.
In yet-to-be-published research conducted last spring after the pandemic started, Dr. Sandstrom found that 64 people who were matched with a stranger for a Zoom call happily chatted for an average of 40 minutes—much longer than the 14 minutes they’d predicted. Participants also reported enjoying the conversation more than they’d expected to, and that the things they’d worried about—such as an awkwardness starting or maintaining the conversation—didn’t happen. They said they had an increased sense of trust in other people after the conversation. And they said they felt significantly less lonely and less socially isolated.
“Having a single conversation with a stranger during this tough time can make us feel better in the world,” says Dr. Sandstrom....

The study also found that people who interact more with strangers are less lonely—and that it doesn’t matter how long those interactions are, just how many of them people have. Participants reported that even emailing with strangers helped. This may be because of something called the “stranger on the train” effect: People sometimes share more with someone they don’t know, which fosters connection.

Henry David Thoreau has told us that "in wildness is the preservation of the world."
That's true.
And in our encounters with each other, too!
Image Credit:
https://www.wsj.com/articles/you-should-talk-to-strangerseven-during-the-pandemic-11613507328