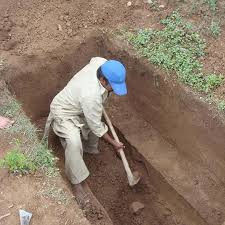 Exactly four years ago, I published a blog posting that I titled, "Denying To The Grave." That posting reported on an article by Elizabeth Kolbert titled, "Why Facts Don't Change Our Minds."
Not so long ago, and more or less by chance, I happened to stumble upon that years-old blog post. I think it's worth a "replay" now, and I hope you will agree. We are still facing the challenges it discusses.
It's not really about grave digging!
oooOOOooo
Denying To The Grave
March 18, 2017
Elizabeth Kolbert has recently written an informative article for The New Yorker. Kolbert's article is titled, "Why Facts Don't Change Our Minds."
In her article, Kolbert reviews three different books. One of the books she reviews is Denying to the Grave: Why We Ignore the Facts That Will Save Us. Kolbert synopsizes Denying to the Grave as follows:

Jack Gorman, a psychiatrist, and his daughter, Sara Gorman, a public-health specialist, probe the gap between what science tells us and what we tell ourselves. Their concern is with those persistent beliefs which are not just demonstrably false but also potentially deadly, like the conviction that vaccines are hazardous. Of course, what’s hazardous is not being vaccinated; that’s why vaccines were created in the first place. “Immunization is one of the triumphs of modern medicine,” the Gormans note. But no matter how many scientific studies conclude that vaccines are safe, and that there’s no link between immunizations and autism, anti-vaxxers remain unmoved. (They can now count on their side—sort of—Donald Trump ...)

All three of the books Kolbert reviews are showing us, she says, that "human reason may have more to do with winning arguments than with thinking straight."
How on earth could that possibly be? Most of us assume that our ability to reason (greater than the ability possessed by other species) is what has helped us survive in a dangerous world.
In fact, Kolbert tells us, citing to the second book she reviews, The Enigma of Reason, by Hugo Mercier and Dan Sperber:

Humans’ biggest advantage over other species is our ability to cooperate. Cooperation is difficult to establish and almost as difficult to sustain. For any individual, freeloading is always the best course of action. Reason developed not to enable us to solve abstract, logical problems or even to help us draw conclusions from unfamiliar data; rather, it developed to resolve the problems posed by living in collaborative groups (emphasis added).

In short, gaining group acceptance for what could be called a "political solution" to a challenge or an opportunity is what has made it possible for human beings to prosper and survive, in evolutionary terms. By mobilizing a collective response to danger or opportunity, humans have been able to be more successful than they ever could have been had they only been able to act individually.
"Reason," thus, turns out not to be some abstract ability to find out the "real truth" about the world, but is more like the ability to provide others with a "reason" for working together to accomplish some particular goal.
The third book mentioned in Kolbert's article is The Knowledge Illusion: Why We Never Think Alone. Authors Steven Sloman, a professor at Brown, and Philip Fernbach, a professor at the University of Colorado, are cognitive scientists. They, too, believe that "sociability is the key to how the human mind functions or, perhaps more pertinently, malfunctions." Naturally, since our "reason" is not really based in our objective examination of the "facts," on a scientific basis, the fact that other people seem to agree with us confirms our understanding. Our "wrong" understanding, in many cases:

As a rule, strong feelings about issues do not emerge from deep understanding ... And here our dependence on other minds reinforces the problem. If your position on, say, the Affordable Care Act is baseless and I rely on it, then my opinion is also baseless. When I talk to Tom and he decides he agrees with me, his opinion is also baseless, but now that the three of us concur we feel that much more smug about our views. If we all now dismiss as unconvincing any information that contradicts our opinion, you get, well, the Trump Administration.

This is how a community of knowledge can become dangerous, Sloman and Fernbach observe. In a study conducted in 2012, they asked people for their stance on questions like: Should there be a single-payer health-care system? ... Participants were asked to rate their positions depending on how strongly they agreed or disagreed with the proposals. Next, they were instructed to explain, in as much detail as they could, the impacts of implementing each one. Most people at this point ran into trouble. Asked once again to rate their views, they ratcheted down the intensity, so that they either agreed or disagreed less vehemently.

Sloman and Fernbach see in this result a little candle for a dark world. If we—or our friends or the pundits on CNN—spent less time pontificating and more trying to work through the implications of policy proposals, we’d realize how clueless we are and moderate our views. This, they write, “may be the only form of thinking that will shatter the illusion of explanatory depth and change people’s attitudes.”

What Sloman and Fernbach are calling for, in fact, is the kind of "political" debate and discussion that will ultimately lead to a "political" solution. We need a solution that is based not on what one side or the other believes is "right," or "true," but on what we find, after discussion and debate, will be collectively accepted, thus allowing us to mobilize cooperative action going forward. The scientists are telling us that the human species has prospered and survived based on that ability to cooperate.
The way I read the Kolbert article, it confirms that we do live, most immediately, in a "political" world, and that our survival in the World of Nature, upon which we ultimately depend, will itself depend on our ability to sustain a "political world" in which we can act cooperatively to meet our common challenges. Time presses on us now, and with great urgency.
Right now, in the United States, genuine political discussion and debate has virtually ceased. Everyone is trying to "prove" the other side wrong, marshaling their arguments, and basing those arguments on what often turn out to be "alternative facts" (and this is true on both sides; let's admit it).
"Forget the facts," is what I think Kolbert's article is saying. The idea that we must use our human reason to find the "right" answer is precisely the "wrong" thing to do.
There are at least two varieties of "right," with respect to every argument, and the "confirmation bias" Kolbert discusses in her article will operate to keep it that way. If we keep on denying each other's arguments, instead of finding out how to "reason together," as the Prophet Isaiah advises, all sides are going to go down, "denying to the grave."
The cracks in the ice at the poles are obvious enough. The World of Nature is being transformed, and not to the benefit of our human civilization.
What is not so clear is whether our human history of collective cooperation can once again prevail, in the face of everything that the Natural World throws at us. It is that cooperation that keeps us safe. It is that cooperation that will allow us to survive. 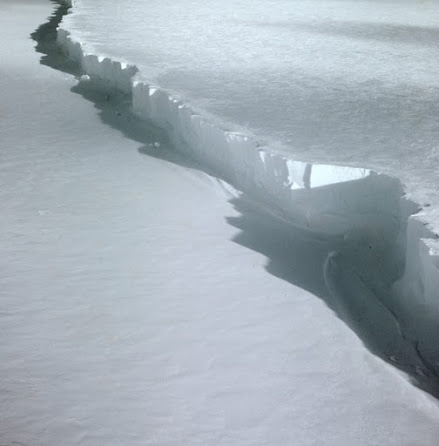