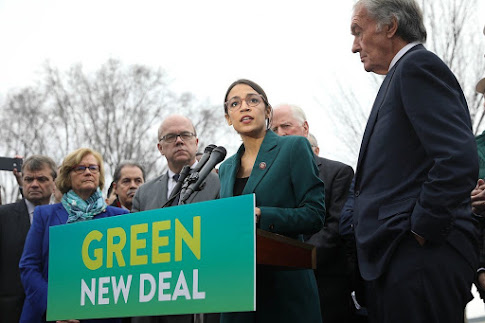 On January 28th, I pointed out that not everyone is completely sold on the "Green New Deal." Of course, the oil companies don't like it, but I was talking about "sincere environmentalists." There are a number of such environmental critics, who express concern that our modern civilization will attempt to solve the so-called "climate problem" with the same kind of high-tech tools that we have deployed to deal with other social and economic problems, and that what is needed, actually, is something like "degrowth."
I ran across another article that makes a related point, with the focus being, in this case, on who might be expected to implement the "Green New Deal."
Jack Delaney, writing in CounterPunch+, puts it this way:

While a handful of elected officials recognize the gravity and push for a Green New Deal (GND) — that rightfully strives to curtail carbon-intensive economic growth — it must also be recognized that the GND is only an initial step. The GND hints at contradictions within the U.S. economy and outlines a transition to alleviate some of these contradictions, yet it is a mere jumping-off point and a framework that leaves questions regarding its implementation.

What are those "contradictions" mentioned by Delaney? What is he getting at? I will let him spell out his argument, himself:

The current mode of production and distribution — of private ownership motivated by unlimited growth and profits — is incompatible with ensuring the survival of humanity, serving the common interest, and staving off ecological collapse. To effectively limit the destructive tendencies of a system based on carbon-intensive growth, mitigate economic contradictions, and reverse course from impending ecological collapse, a bold conversation offering implementation with explicit class politics is urgently needed from GND champions.
GND supporters — Congressional, amongst the public, and media — must begin to look at how to achieve the resolution’s goals and consider the ideological framework of the GND’s implementation... As the clock ticks down and the urgency to correct climate change draws near, the GND’s future implementation cannot rely on rudderless ideological appeasement to the market (emphasis added).

In California, arguably a bold leader in efforts to combat global warming, the promise of the Global Warming Solutions Act of 2006 has been transmogrified into a so-called "Cap and Trade" system of "market mechanisms" that allow major carbon-emitting industries to pay money to the state, instead of actually reducing emissions that they could, technologically speaking, eliminate.
THAT is what Delaney is talking about. He is absolutely right!
In other words, we have a bigger job ahead of us than we might have expected. Not only do we need to rework our entire economic system, aiming to eliminate the combustion of fossil fuels by the earliest possible time, we need to rework our political and economic system, too, so that we don't let corporations transfer to the government their responsibility to make the maximum reductions technically possible. I am hoping that there will be a real effort, in California, to make that happen.
We know what the alternatives are, if we don't succeed! 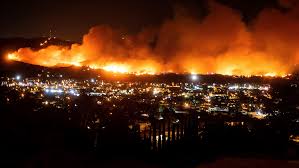