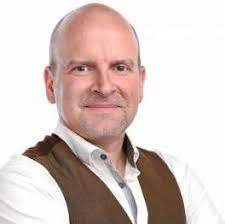 That is Joe Garofoli, portrayed above, for those who don't immediately recognize the picture. Garofoli is the San Francisco Chronicle’s senior political writer, covering national and state politics. His columns now appear on Sundays (replacing long time contributor Willie Brown). Garofoli has worked at The Chronicle since 2000 and in Bay Area journalism since 1992, when he left the Milwaukee Journal.
Garofoli's first Sunday column appeared on Sunday, February 7, 2021, and Garofoli used the occasion to "reintroduce" himself to Chronicle readers. I am not sure that this was strictly necessary, since Garofoli has been writing in the Chronicle for such a long time - even if it wasn't on Sundays.
Nonetheless, reintroduce himself he did, and Garofoli's first column in the Sunday slot replayed his personal journey from Pittsburgh, to Milwaukee, to the Bay Area, and focused on how wonderful California is. Or maybe was, to be more accurate!

We defend California quicker and louder because we uprooted our lives to move thousands of miles to be here. We can’t understand why people would want to leave, because we believe with a convert’s zeal in the promise that California has long offered: This is the place not just to chase your dream, but to catch it. It is where you can be yourself and be with whom you choose to be with and say what you want, when you want and as loudly as you want. Unlike the places we left.
That’s why I moved here nearly 30 years ago. I believed all that. I still do.
So that’s why it hurts us converts more when California doesn’t live up to that promise. Like now.
Living the California dream is nearly impossible for anyone who isn’t already rich. Or, for the most part, white.

The dream isn’t attainable now for a skyrocketing number of residents who can’t buy a home or can’t afford rent unless they pack eight people into a two-bedroom apartment. It is a sham to people who shake their head at $12 grilled cheese sandwiches or wonder who would pay $7 for a shot of pressed juice....

While I wholeheartedly endorse these comments (and in fact wrote something rather similar in my blog post last Thursday, though my remarks were focused on my Santa Cruz hometown, not the state as a whole), what interested me most about Garofoli's first Sunday column was this statement:

For the past five years, this column (and my accompanying podcast) has been called “It’s All Political” for a reason. Everything we do — and everything we hope to change — has a political element to it.
People can march in the streets in support of Black lives, but structural change will come only through political solutions. Yes, change starts in the streets. Nothing makes a politician move faster than the threat of losing a job. But lasting change doesn’t happen unless laws are changed.
Our political system may be broken, but I remain optimistic that politics can be the route to change. Because I’ve seen it happen just in the time that I’ve lived here (emphasis added).

Our problems are "political" problems. We "live in a political world." That is the way I put it, and Joe Garofoli says it this way: "It's all Political."
Our political engagement can transform the realities to which we all too often defer, believing them to be inevitabilities. They are not. Whatever is the case right now, that we can change.
It's all political!
I'm with Joe on that.
Image Credit:
https://www.sfchronicle.com/author/joe-garofoli/