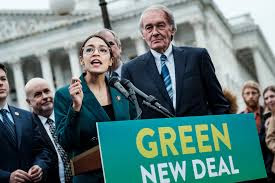 The New York Times article from which I grabbed the picture above is headlined as follows: "People Actually Like the Green New Deal." That strikes me as a kind of surprising headline, since I tend to think, "what's not to like?"
The Green New Deal resolution that was introduced into the Congress in February 2019 is described as follows in the official press release that announced its introduction:

Senator Edward J. Markey (D-Mass.) and Rep. Alexandria Ocasio-Cortez (NY-14) today introduced a Green New Deal resolution in both the Senate and House of Representatives that would create millions of good, high-wage jobs in the United States, provide unprecedented levels of prosperity and economic security for Americans, and counteract systemic injustices – all while addressing the existential challenge of climate change. Recent landmark studies such as the United Nations’ Intergovernmental Panel on Climate Change Special Report and the U.S. National Climate Assessment Fourth Report have made it clear that we need bold action to avoid the worst impacts of climate change, and we may have as few as 12 years to achieve it. The extreme weather, storms, droughts, and wildfires of recent years have made the worsening effects of climate change impossible to ignore.

Senator Markey and Congress Member Ocasio-Cortez (both of whom are pictured above) were joined by a number of co-sponsors, who also signed onto the Green New Deal resolution. Those co-sponsors included Senator Bernie Sanders, Senator Elizabeth Warren, and our current vice-president, then a Senator, Kamala Harris.
Markey and Ocasio-Cortez are certainly right about the need to take immediate action to deal with our global warming crisis. If we can do that in a way that will "create millions of good, high-wage jobs," that seems likes a legislative winner to me. As I say, "What's not to like?"
Well, it does appear that not everybody likes the Green New Deal - and I am not talking about benighted Republicans and corporate CEOs, either - those who are dedicated to maximizing corporate profits even if doing that brings on a "Sixth Extinction."
As it turns out, a number of very sincere environmentalists are expressing concern about the whole Green New Deal concept. Jasper Bernes, writing in Commune, is one of the critics. He titles his critique, "Between The Devil and the Green New Deal." More extreme in her views is Cory Morningstar, who seems to believe that there is a carefully coordinated and malign effort to promulgate a destructive Green New Deal program, and this effort involves both the global corporate elite and what she calls "the non-profit industrial complex."
I must say that I discount the idea that there is a bonafide conspiracy by groups like Conservation International and the World Economic Forum to go to war against both humanity and nature, all in the name of world domination and increased profits for the corporations that have already come pretty close to ruling the world. This is, pretty much, the charge levelled by Morningstar.
Other concerns, however, I do think have some validity. Here, for instance, is how Bernes begins his article:

From space, the Bayan Obo mine in China, where 70 percent of the world’s rare earth minerals are extracted and refined, almost looks like a painting. The paisleys of the radioactive tailings ponds, miles long, concentrate the hidden colors of the earth: mineral aquamarines and ochres of the sort a painter might employ to flatter the rulers of a dying empire.
To meet the demands of the Green New Deal, which proposes to convert the US economy to zero emissions, renewable power by 2030, there will be a lot more of these mines gouged into the crust of the earth. That’s because nearly every renewable energy source depends upon non-renewable and frequently hard-to-access minerals: solar panels use indium, turbines use neodymium, batteries use lithium, and all require kilotons of steel, tin, silver, and copper. The renewable-energy supply chain is a complicated hopscotch around the periodic table and around the world. To make a high-capacity solar panel, one might need copper (atomic number 29) from Chile, indium (49) from Australia, gallium (31) from China, and selenium (34) from Germany. Many of the most efficient, direct-drive wind turbines require a couple pounds of the rare-earth metal neodymium, and there’s 140 pounds of lithium in each Tesla.

This is, in essence, the same argument that was advanced by Jeff Gibbs and Michael Moore in Planet of the Humans - although Bernes addresses the basic point in a slightly different context.
I have written about the Gibbs-Moore movie previously, and I wrote about it pretty positively, because I do think it is important to admit that our first instinct is often to believe that some new "technology" is going to solve the problems caused by the way we have developed and deployed our earlier technologies. That is often a huge mistake.
We, as humans, are quite enamored with our own great capabilities, so if Mother Nature is telling us that our civilization is "Out of Balance" (to reference another, much earlier environmental movie, Koyaanisqatsi), then we tend to think that our task is to solve that problem ourselves. In fact, quite often, our real task is to realize that we are the problem!
The critics of the Green New Deal that I am talking about are concerned that when we start talking about amping up our economy as we try to deal with our global warming crisis, we can easily become confused.
We are, in fact, way "out of balance," and a bigger economy is not what is called for. What is called for is a reorganization of how we live together and conduct our lives within the limits established by the laws that govern the World of Nature.
We do live, ultimately, in that World of Nature, and not in the human world that we create. This failure to understand the utter dependence of our own, humanly-created world on the world that we did not create, and in which we find ourselves so marvelously and mysteriously alive, is the general cause of many of our problems. It is definitely the cause of the global warming crisis that now threatens our species, and many more, and everything we have established over thousands of years of human civilization.
I am in favor of dealing with economic injustice as we also take steps to reorient our relationship to the World of Nature, and to turn away from an economic and political system that always wants more, and that wastes more, day by day.
Image Credit:
https://www.nytimes.com/2019/03/27/opinion/sunday/green-new-deal-mcconnell.html