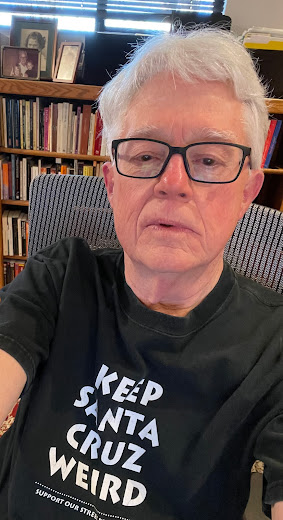 I have been reading a book that I am enjoying quite a bit. It is titled, The Patterning Instinct, and was authored by Jeremy Lent. The subheading on the title page is: "A Cultural History of Humanity's Search for Meaning."
Well, I am always searching! It's looking like I am going to discover quite a bit of meaning right here in the book, too. George Monbiot, by the way, according to Lent's website, says that the book is "the most profound and far-reaching book I've ever read." Definitely a recommendation I'd take seriously, if I hadn't already taken the plunge. I am reading the book based on a recommendation by my friend Derede Arthur, who actually delivered me a copy to make sure I read it!
I was somewhat startled to find, on page 213, that our local slogan - Keep Santa Cruz Weird - may need to be reconfigured somewhat. As you can see from my shirt (perhaps still available from Bookshop Santa Cruz), people from Santa Cruz, and certainly including me, tend to glory in the idea that our community is just a little bit "weird." A little bit outside convention. A little bit "risky," even, willing to try new things, willing to push some limits. Let's keep it that way, too. That's what I think!
Lent, who is working on "the cultural shaping of our minds," has a different take on "WEIRD." It's an acronym, the way he uses it:

In the individualistic culture of the West, there is high value attached to being talented, taking care of yourself, and competing successfully in the marketplace. In East Asia, a "good" person may instead be seen as someone attentive to her own weaknesses, motivated by self-improvement, and emphasizing the values and needs of those around her.

What should we make of these differences that have persisted through the millennia? One important implication is that many attributes that psychologists have believed to be human universals are really only true for Westerners, a relatively small portion of humanity. A group of researchers, pointing out that most psychology experiments are carried out on samples drawn from Western, Educated, Industrialized, Rich, and Democratic societies have memorably given this subpopulation the acronym WEIRD. People from WEIRD societies are, it turns out, frequent outliers in experiments conducted globally, and one of the least representative human populations (emphasis added).

Well, if being "WEIRD" means to be "Western, Educated, Industrialized, Rich, and Democratic," my personal sense of our local community doesn't completely fit with the acronym. "Educated?" Well, I'll go for that. The University of California has really increased the educational level of our town. When I first got here, for instance, prior to the advent of UCSC, the only place I could find to buy a book was at the Greyhound Bus Station on Front Street, in one of those revolving, wire racks. "Democratic" also fits what I think of as a salient character of my community. We have made use of the democratic process to make huge changes during the last forty-five years, the years in which I have been here and have been involved in local public policy making.
But what about "Western?" What about "Industrialized?" What about "Rich?" My son is a practitioner of Traditional Chinese Medicine - and he is definitely not alone in that. I believe that there are, probably, more acupuncturists per capita here than in almost any other community in the United States. "Eastern" influences abound - and that is one of the things that makes us "Weird." Take a walk in the "Land of Medicine Buddha." How many communities have a retreat center like that?
"Industrial" influences are also not a defining characteristic of our community. Even Lipton Tea is no longer with us (though it was here when I first arrived). As for "Rich," we have always prided ourselves, in my opinion - and rightfully so - that you don't have to be "rich" to be able to live here, in one of the most wonderful places to live in the entire world. And yet we know that money is driving the non-rich out. That is certainly one of our top social and political problems.
We are not going to be truly "Weird," in the way we always have been, if Western, capitalistic high-tech industry and industry workers move in, buy up all the housing, and by doing so compel all those who don't qualify as "rich" to leave. And like I say, that seems to be what's happening right now. We are becoming less "Weird" by becoming more "WEIRD," in the way that Lent's acronym plots it out.
I generally advocate "democracy" as the recourse for all those who want to build, and sustain, a community worth keeping. Currently, we are mostly letting "the market" determine the shape and character of our community, and we won't be "Weird" for long if we don't fight back.
When I came to Santa Cruz, the "market" guys wanted to build a convention center, high-rise hotel, a Rancho Del Mar-sized shopping center, condominiums and seven acres of blacktopped parking lots on Lighthouse Field. Everyone in positions of power thought that was going to be just great. But the community didn't actually support the plan. So it didn't happen. That was strange. We got involved. We changed what was assumed to be inevitable (and desirable). Later on, we stopped the conversion of prime agricultural land into condos, shopping malls, and car dealerships. Hardly anything like that has ever happened, anywhere else (go check out what happened to the so-called "Silicon Valley" as they knocked down the apricot trees).
I have been pretty happy with how my community has never succumbed to that WEIRD combination that includes letting "industry" have its way, in order to make some people rich. We'd better watch out, though, if we don't want what is best in our community to be kicked to the curb by those espousing the "growth is the goal" policies that are oriented to helping those with the most to get even more.
My advice (and I wear it proudly on my shirt) is still good advice:
Keep Santa Cruz Weird (not an acronym)
Image Credit:
Gary A. Patton, personal photo