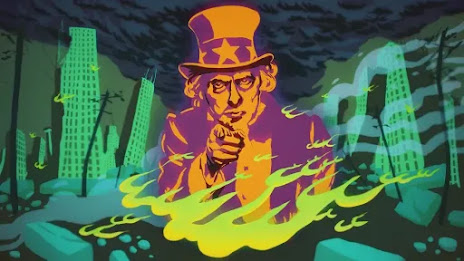 Medea Benjamin and Nicolas J. S. Davies have written, recently, about "The decline and fall of the American Empire." Their first job in this article is to convince American readers that their country has actually ever been an "Empire," since that isn't the way most Americans like to think about their country.
Benjamin and Davies quote Republican Party political consultant Karl Rove as an authority, citing his boast that "we’re an empire now, and when we act, we create our own reality.” Perhaps more telling, they also quote our first president, George Washington. Still, Davies and Benjamin make clear that few Americans think of the United States as an "Empire," or concede that the country has any imperial ambitions. As they note, "post-World War Two Americans grew up in carefully crafted ignorance of the very fact of American empire." They note, as well, that "the myths woven to disguise it provide fertile soil for today’s political divisions and disintegration. Trump’s 'Make America Great Again' and Biden’s promise to 'restore American leadership' are both appeals to nostalgia for the fruits of American empire."
In other words, Benjamin and Davies suggest that Americans are in a state of denial about the imperial past of their country, while simultaneously having a deep nostalgia for what that imperial past included. Their bottom line? Give up on "Empire!"

Even in the American empire’s neocolonial phase, the role of the U.S. military and the CIA was to kick open doors through which American businessmen could “follow the flag” to set up shop and develop new markets.

But now U.S. militarism and America’s economic interests have diverged. Apart from a few military contractors, American businesses have not followed the flag into the ruins of Iraq or America’s other current war-zones in any lasting way. Eighteen years after the U.S. invasion, Iraq’s largest trading partner is China, while Afghanistan’s is Pakistan, Somalia’s is the UAE (United Arab Emirates), and Libya’s is the European Union (EU).

Instead of opening doors for American big business or supporting America’s diplomatic position in the world, the U.S. war machine has become a bull in the global china shop, wielding purely destructive power to destabilize countries and wreck their economies, closing doors to economic opportunity instead of opening them, diverting resources from real needs at home, and damaging America’s international standing instead of enhancing it.
When President Eisenhower warned against the “unwarranted influence” of America’s military-industrial complex, he was predicting precisely this kind of dangerous dichotomy between the real economic and social needs of the American people and a war machine that costs more than the next ten militaries in the world put together but cannot win a war or vanquish a virus, let alone reconquer a lost empire.

China and the EU have become the major trading partners of most countries in the world. The United States is still a regional economic power, but even in South America, most countries now trade more with China (emphasis added).

I think it's true that Americans seem to want it both ways. We don't want to admit to any "imperial" pretensions (it seems so "undemocratic"), but we do - or many of us do - want to be appreciated as the "greatest country in the world," and we do want our ideas of how the world should work to be accepted, generally, by everyone else. Conveniently, when other nations do that, the United States - or at least the corporations and the rich people among us - tend to benefit.
To me, the greatest contribution that Benjamin and Davies make in this recent article is their analysis of how United States militarism and military spending is an effective way to make sure that American influence will diminish on a worldwide basis. Rather than supporting the perquisites that go along with "empire," our unconstrained military spending is undermining everything.
Good point! Let's pay attention and make some budgetary readjustments!

China has lifted 800 million people out of poverty, while America’s poverty rate has barely budged in 50 years and child poverty has increased. America still has the weakest social safety net of any developed country and no universal healthcare system, and the inequalities of wealth and power caused by extreme neoliberalism have left half of Americans with little or no savings to live on in retirement or to weather any disruption in their lives. Our leaders’ insistence on siphoning off 66% of U.S. federal discretionary spending to preserve and expand a war machine that has long outlived any useful role in America’s declining economic empire is a debilitating waste of resources that jeopardizes our future.

Decades ago Martin Luther King Jr. warned us that “a nation that continues year after year to spend more money on military defense than on programs of social uplift is approaching spiritual death.”

As our government debates whether we can “afford” COVID relief, a Green New Deal and universal healthcare, we would be wise to recognize that our only hope of transforming this decadent, declining empire into a dynamic and prosperous post-imperial nation is rapidly and profoundly to shift our national priorities from irrelevant, destructive militarism to the programs of social uplift called for by Dr. King.