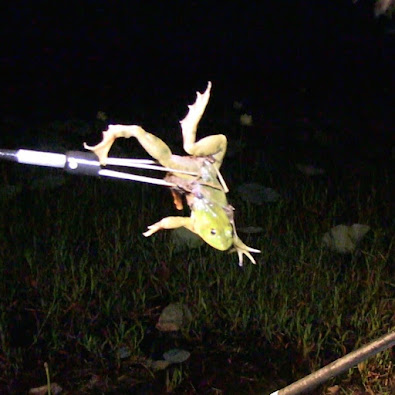 The rather horrible photo above shows a frog that has been "gigged." The photo can also be seen at the top of my blog posting from April 15, 2017, a blog posting in which I inveighed against the "gig economy." That blog posting was, at that time, the third blog post that I had devoted to the topic. The link I just provided will get you to all of those posts, in case you have any interest in the subject, or in my thoughts about it.
"Gig," by the way, has a number of definitions. These definitions include, when the word is used as a noun:

Gig - a pronged spear for catching fish (or frogs).

I was reminded of the "gig economy" recently, when I heard from union representatives who are bargaining with the UC Office of the President on behalf of lecturers at UCSC and all the other UC campuses. I happen to be one of them.
One key objective of the lecturers and the union is increasing "job stability" for the lecturers. The University of California (as opposed, for example, to the California State University system) generally provides no effective job security until a lecturer has taught for six straight years. The CSU System provides job security after only one year of teaching, for teachers whose evaluations indicate that they are doing an excellent job.
My union representative called the UC approach a commitment to "gig academics." That reminded me of how much I dislike the idea that companies and other organizations with mammoth financial power think that the workers who make their organizations run are dispensable and interchangeable. Apparently, the UC System churns through its lecturer pool at the rate of 29% each year. That's the figure that the union gave me.
In the UC System, and in the rest of our economy, too, workers should not be treated like "frogs" or "fish," and the "gig economy" is not a worthy economy for a nation serious about including everyone in the work that holds us all together.
Image Credit:
http://info.flgatorhunts.com/blog/frog-gigging-trips-in-florida