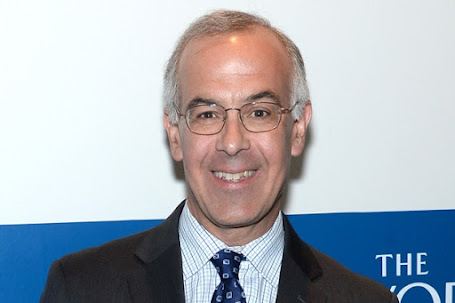 The picture above, of New York Times' columnist David Brooks (a somewhat younger Brooks, I believe), accompanied a brief article that took Brooks to task for trying to be too nice to gun owners. Brooks, who is considered to be a conservative, is not my favorite pundit, but his instincts are not always wrong, either. He is, oftentimes, trying to appeal to our better natures, and that's not such a bad idea.
Here is an excerpt from what Brooks said in a column that appeared on Sunday, October 18, 2020, in the San Jose Mercury News. The headline of the column (in the hard copy edition) was, "Making America great requires moral vision that puts an end to division." That translated, online, to "How to actually make America great." I don't much like that split infinitive, but I do think that these observations from Brooks' column are worth passing along:

“The Upswing,” a remarkable new book by Robert D. Putnam and Shaylyn Romney Garrett [is] a careful work of social science; the book looks at American life from about 1870 to today across a range of sectors that are usually analyzed in separate academic silos.
The first important finding is that between the 1870s and the late 1960s a broad range of American social trends improved: Community activism surged, cross party collaboration increased, income inequality fell, social mobility rose, church attendance rose, union membership rose, federal income taxes became more progressive and social spending on the poor rose.
Many of us think that the gains for African Americans only happened after the Civil Rights Act of 1964, but Putnam and Garrett show that the fastest improvements actually happened in the decades before. Black school attendance, income gains, homeownership rates, voter registration rates started rapidly improving in the 1940s and then started slowing in the 1970s and 1980s.
The American century was built during these decades of social progress. And then, around the late 1960s, it all turned south.
Over the past 50 years, the positive trends have reversed: membership in civic organizations has collapsed, political polarization has worsened, income inequality has widened, social trust has cratered, religious attendance is down, social mobility has decreased, deaths of despair have skyrocketed and on and on.
The crucial change was in mindset and culture. As Putnam and Garrett write: “The story of the American experiment in the twentieth century is one of a long upswing toward increasing solidarity, followed by a steep downturn into increasing individualism. From ‘I’ to ‘we’ and back again to ‘I’.”
The frequency of the word “I” in American books, according to Putnam and Garrett, doubled between 1965 and 2008. The authors are careful not to put it into moralistic terms, but I’d say that, starting in the late 1960s, there was left wing self-centeredness in the social and lifestyle sphere and right wing self-centeredness in the economic sphere, with a lack of support for common-good public policies. But it was socially celebrated self-centeredness all the way across. It was based on a fallacy: If we all do our own thing, everything will work out well for everybody (emphasis added).

I think there was more going on than both "leftwing" and "rightwing" self-centeredness in the decades following the 1960's. You might want to review my blog posting on the recent book, Evil Geniuses, to see what I'm talking about. Nonetheless, things will always get worse - as Brooks is arguing - to the degree that we don't understand, at the deepest level of our politics and personal lives, that we are "all in this together."
Bottom line, it's "we" not "I."
It is definitely time to start remembering that, so we can get back on the "upswing."
Image Credit:
https://www.thewrap.com/david-brooks-dragged-for-column-urging-respect-to-gun-owners/