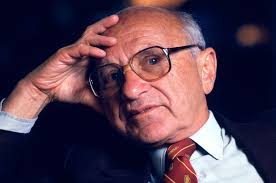 I have just finished reading Evil Geniuses, The Unmaking of America, by Kurt Andersen. The cover of Andersen's brand-new book is shown at the bottom of this blog posting. One of the "evil geniuses" that Andersen identifies is pictured above. That's Milton Friedman. Also included in Andersen's "evil genius" list are Charles and David Koch, generally known as the "Koch Brothers," Grover Norquist, Lewis F. Powell, Jr., Richard Mellon Scaife, and Joseph Coors. I am providing you only a "partial list," which doesn't include any of the conservative think tanks that carried out the extreme right-wing agenda put into play by the "geniuses."

Andersen documents how a discrete number of well-connected businessmen and their supporters (all men, of course) collaborated with others to design and then implement a program systematically to turn America away from all of the social and economic gains made in the first part of the 20th Century. Their project was to change American politics and law to build a governmental structure that  would advantage corporations, and disadvantage working people, and that would siphon wealth from poor and middle class Americans into the small class of the super-rich. Andersen calls it the "long game." As he tells the story, the plan was initiated in the late 1960s and came to fruition in the 1980's, and  has been working itself out in all the years that have followed.

They had a plan, those "evil geniuses," and what do you know? The plan worked! Andersen's point, in telling us what is, in some sense, a very familiar story, is to point out that all of the changes that have led to our current economic, social, and political situation - the conditions that gave us Donald J. Trump as president -  didn't just "happen" by some sort of autonomous process. There was an actual plan in place - and not really even a "conspiracy," because it was pretty public. People worked to carry it out, and their work paid off.

It paid off for them, that is! As Andersen says on Page 190:

It wasn't just that serious salary increases started going only to a small group of fortunate workers. The share of money that went to all employees, rather than to corporate shareholders and business owners, also became smaller. Until 1980, America's national split of "gross domestic income" was around 60-40 in favor of workers, but then it began dropping and is now approaching 50-50. That change amounts to almost $1 trillion a year, an annual average of around $5,000 that each person with a job isn't being paid. Instead, every household in the top 1 percent of earners has been getting $700,000 extra every year. It undoubtdly has been the largest and fastest upward redistribution of wealth in history.

Andersen does an outstanding job helping us to understand exactly how our economy, and society, and politics were transformed over the last fifty years, and he shows us that the way things are now was not, ever, inevitable. Now, it's time to turn the tables, he says, and he does give us a few suggestions.

Meanwhile, as I have been reading about Milton Friedman and the other "evil geniuses" in Andersen's book, The New York Times has also been turning its attention to Friedman. Perhaps it's not a coincidence that the critique of Friedman outlined by Andersen is directly addressed by an Opinion Editorial in the September 19, 2020 edition of The Times. In the hard copy version that hit my doorstep last Saturday, The Times' Op-Ed is titled, "Blaming Milton Friedman." Online, The Times expanded its thought, headlining the Op-Ed as follows: "50 Years of Blaming Milton Friedman. Here’s Another Idea."

Before we get to that "other idea," what is the essence of the complaint against Friedman? The Times' Op-Ed, authored by Binyamin Appelbaum, puts it this way: "Corporations, [Friedman said], have no social responsibilities except the sacred responsibility to make money." Andersen would concur that this is something to complain about. One of the main themes of his book is that this so-called "principle" of of our "political economy," in combination with the various activities of the other "evil geniuses" he names, has produced the horrific economic, social, and political effects that we are living with today.

So, what's that "other idea" that The Times suggests we ought to consider? Here is how Appelbaum presents it:

Friedman, a free-market ideologue, published an essay 50 years ago this week in The Times Magazine in which he argued that corporations should not go beyond the letter of the law to combat discrimination or reduce pollution or maintain community institutions. Corporations, he said, have no social responsibilities except the sacred responsibility to make money.

The essay was a big hit with the executive class. Rich people were only too delighted to see selfishness portrayed as a principled stand. Friedman’s creed became the standard justification for corporate callousness. The Business Roundtable, a leading lobby for large companies, declared in 1997 that maximizing profit was the purpose of a corporation.

Critics have been fighting ever since to get corporations to acknowledge broader responsibilities.

I tend to think that Andersen would agree with The Times' Op-Ed. I agree with it, too.

Instead of begging the corporations to "treat us nice," we need to ressurect a government that acts on behalf of the public (not the corporations), and that makes these corporations conduct themselves in ways that don't siphon off wealth to the ultra-rich. Using our political power, we need to ensure that corporations are enforceably required to share the amazing productivity of our economy with everyone in the country. As I like to say, whenever it seems the slightest bit relevant: "We are all in this together."

Here is the most amazing thing I read in the Andersen book. Think about it. Understand what is really being said here:

Those numbers shocked me. They shocked me so much I had a long correspondence with a Harvard economics professor about them to make sure I wasn't misunderstanding something.

In this leveled-out America 2 not only would nobody be poor (or rich) but everyone would be upper middle class. Everyone would have an income and net worth that would put them, in today's actual America, well within the most affluent top fifth of the population. It would almost be as if the American Dream tagline of the fictional town in A Prairie Home Companion, "all the children above average," came true for the whole country economically.

A "perfect" sharing of all our nation's resources is probably not going to happen anytime soon. But there is clearly lots of room to "level up." And let's not think that "leveling up" is impossible or unrealistic. Remember that the "evil geniuses" implemented a plan that has "leveled us down" over the last fifty years, and that has created the mammoth income inequality that characterizes our country today.

Let's remember that democratic self-government means that it is "We the people," not the corporations or the "evil geniuses," who actually have the ultimate power. Of course, to make that work for us, we have to organize and use it.

So, having read what Andersen tells us could be possible, here's my thought: Let's make a plan!

This book is highly recommended! 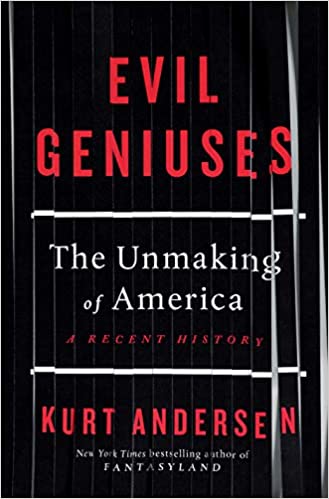