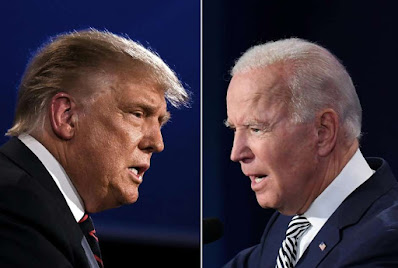 This blog posting is not, as the image above might suggest, about trying to embrace the divisions in our national politics, to bring Democrats and Republicans together. The picture pair at the top of this posting accompanied a recent editorial commentary by Joe Mathews, which is why it has ended up here. It is the Mathews' commentary that I want to feature. Mathews said something that I think is very important, and that we all tend to forget.
Here is how Mathews began his column:

Do you trust your state officials more than the feds or dream of California independence? Then you’re a traditional American patriot. Or do you cling to hopes of national unity and compromise to preserve our union? Then you’re part of the problem.

Because I am pretty sure that the Mathews' column is so tightly paywall-protected that most of the readers of this blog would not be able to read the original, I have included the entire column below. The point Mathews makes, and that I would like to highlight, is that we have a federal system, and that what best guarantees our freedom is not the central power of the national government (the power that Donald J. Trump is now welding with abandon, and in defiance of what we have always assumed is the proper way to conduct oneself as president); what protects our freedom is actually the dispersed powers of our state governments.
This is, incidentally, a point that Hannah Arendt continually made. The genius of the American Revolution was that it dispersed governmental powers, pitting power against power, so that the construction of the kind of authoritarian, totalitarian government that Arendt had fled, in Germany, would be hard to achieve. Read Mathews' column, and consider this point.
Remember, too, the Tenth Amendment, the capstone of our Bill of Rights:

The powers not delegated to the United States by the Constitution, nor prohibited by it to the States, are reserved to the States respectively, or to the people.

When you start looking at what powers actually were delegated to the national government, in the Constitution, you will notice that it is a rather short list. Over the last 244 years, we have more or less forgotten this. The "Commerce Clause" has come to justify national government action on almost every issue, and the demands of national level problems have led us to forget that it is the national government, and that government alone, that is supposed to have "limited powers." The state governments are our basic and primary level of government.
We are the United "States" of America, with the states being our first and most important level of governmental power. In reconstituting American democracy, after the upcoming election, it would be wise to remember this.
Here's that entire Mathews' column, below.

oooOOOooo
Do you trust your state officials more than the feds or dream of California independence?
Then you’re a traditional American patriot.
Or do you cling to hopes of national unity and compromise to preserve our union?
Then you’re part of the problem.
The frightening 2020 election is disrupting how we think about America and California’s place in it — and thank goodness for that. Perhaps now, Americans might see national unity as a dangerous pursuit, and embrace our divisions in service of building a better future.
This powerful argument fuels two smart new books. One is an American history, “Break It Up: Secession, Division, and the Secret History of America’s Imperfect Union” by the Nation writer Richard Kreitner. The other is a California-inspired analysis of the present and future, “Citizenship Reimagined: A New Framework for States’ Rights in the United States,” by Arizona State University political scientist Allan Colbern and UC Riverside Center for Social Innovation Director S. Karthick Ramakrishnan.
The two books share a crucial insight: that the federal government is not a reliable protector of Americans’ rights. Indeed, when Americans unify and compromise, we often do awful things — enshrining slavery in the Constitution, instituting Jim Crow, incarcerating minorities and starting wars. Instead, actual progress often results from states going their own way, from fighting slavery to expanding suffrage.
The good news is that Americans aren’t often cursed with national unity. Division is our natural state, as befits a country that venerates its founding divorce filing, the Declaration of Independence. “Secession is the only kind of revolution we Americans have ever known and the only kind we’re ever likely to see,” Kreitner writes.
Kreitner shows how breaking up the country has been sought by every region, across every era. He offers memorable tidbits, from President Zachary Taylor’s 1849 opinion that California should be independent to the American diplomat George Kennan’s 1993 argument that the U.S. is “a monster country” that should be divided into a dozen republics.
“Paradoxically,” Kreitner writes, “disunion has been one of our only truly national ideas.”
From the Civil War to the civil rights movement, division and conflict have inspired big changes in America. “Disunion startles a man to thought,” said the 19th century abolitionist William Lloyd Garrison, who believed the North should leave a Union compromised by slavery. “[Disunion] takes a lazy abolitionist by the throat, and thunders in his ear, ‘Thou are the slaveholder!’”
How to use division to better America is a subject of Colbern and Ramakrishnan’s book. These two scholars argue that, to counter toxic federal regimes and expand rights, states should exercise powers that we typically think of as federal (emphasis added).