#284 / The Crisis Of American Democracy 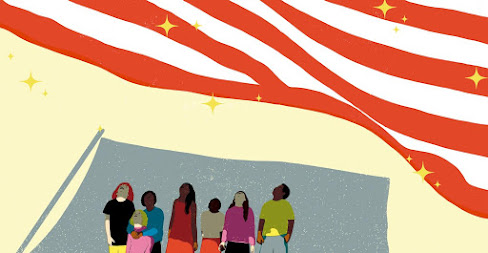 I was quite impressed when I received the most recent edition of American Educator, which is a publication of the American Federation of Teachers. I am an AFT member, so I got the magazine in the mail. It appears to me, though, that the AFT would like non-members to read the magazine, too. Just click the link I have provided above; all the articles from the Fall issue will then be at your command. As I say, I think the entire issue is impressive. And it is not just for teachers!
The article that most impressed me was entitled, "The Crisis of American Democracy," by Steven Levitsky and Daniel Ziblatt. They are both professors at Harvard, and this article follows up on their book, How Democracies Die, which was published in 2018.
The article in American Educator is a thorough analysis of what has happened, and is happening, to democracy in America. After outlining how we got to our current situation, Levitsky and Ziblatt then pose this question:
Why Is This Happening?

The driving force behind democratic norm erosion is polarization. Over the last 25 years, Republicans and Democrats have come to fear and loathe one another. In a 1960 survey, 4 percent of Democrats and 5 percent of Republicans said they would be displeased if their child married someone from the other party. Fifty years later, a survey found those numbers to be 33 percent and 49 percent, respectively. According to a 2016 Pew Survey, 49 percent of Republicans and 55 percent of Democrats said the other party makes them “afraid.” And a recent study by political scientists Danny Hayes and Liliana Mason shows that about 60 percent of both Democrats and Republicans said they believed the other party was a “serious threat to the United States.” We have not seen this kind of partisan hatred since the late 19th century.
Some polarization is normal—even healthy—for democracy. But extreme polarization can kill it. As recent research by political scientist Milan W. Svolik shows, when societies are highly polarized, we become more willing to tolerate undemocratic behavior by our own side. When politics is so polarized that we view a victory by our partisan rivals as something that is catastrophic or beyond the pale, we begin to justify using extraordinary means—such as violence, election fraud, and coups—to prevent it. Nearly all the most prominent democratic breakdowns across history (from Spain and Germany in the 1930s to Chile in the 1970s to Thailand, Turkey, and Venezuela in the early 2000s) have occurred amid extreme polarization. Partisan rivals came to view one another as such an existential threat that they chose to subvert democracy rather than accept victory by the other side.

Now, Levitsky and Ziblatt leave no doubt that the Republican Party has been a prime mover in causing a dangerous deterioration of our democracy. I certainly don't dispute what they say, but do let me recommend another reading, Evil Geniuses, a book I wrote about in late September. That book is pretty convincing that the Republican Party is operating according to a plan that was not necessarily dreamed up by the Republican Party itself, but is rather a plan that was produced by the corporate and business elites that have used the Party as their tool.
Evil Geniuses is another recommended reading, and since I seem to be in a recommending frame of mine, you might also want to sample, "Do You Speak Fox," from The Atlantic magazine, which documents how the Fox "news network" has actively and consistently supported and promoted the kind of polarization that Levitsky and Ziblatt identify as the "driving force" in the erosion of our democratic norms.
Here's what is worrying me. It takes two to polarize! Democracy demands "unwritten norms of mutual toleration and forbearance." That is what Levitsky and Ziblatt say. Mutual tolerance and forebearance is not the same thing as "tit for tat, but more so," which is a prescription now being suggested as a proper course for the Democrats, should the Democrats win the presidency and the Senate in November. Here is how one friend put it:

First dems have to get the WH, Senate and House. With all three in their control, I'll bet you my left lung that, yes, they will indeed get rid of the filibuster, electoral college, pack the supreme court, and add statehood to Puerto Rico and DC. Then the US will officially be ruled by one party, pretty much for generations to come.

Is that going to resolve the "Crisis of American Democracy?" Let me, please, express some doubts. If the nation were truly "ruled by one party," the word "democracy" is not the word that springs to mind. If polarization is the identified problem - as Levitsky and Ziblatt say - then making either of our political parties all-powerful does not solve our democratic dilemma.
oooOOOooo
As a final recommended reading, let me direct you to another article from The Atlantic: "A Pro-Trump Militant Group Has Recruited Thousands of Police, Soldiers, and Veterans." As we talk about the crisis of American democracy, a lot of people are picking up guns. I don't think that's a good direction, either!
I have made this point before: civil war is no solution!
Image Credits:
https://www.aft.org/ae/fall2020/levitsky_ziblatt