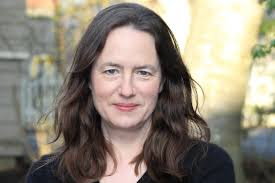 Heather Cox Richardson, pictured above, writes a daily bulletin, distributed widely under the title, "Letters From An American." If you click the link, you can sign up to get her daily bulletins sent to you by email. I, personally, think that they are both informative and motivating!

In her September 1, 2020 letter, Richardson says this:

I try to write these Letters as if they are sort of a flowing report on the news. But I just can’t flow over this number once again. We have lost almost 185,000 people to Covid-19. That number is a 9-11 attack every day for two months. It is flying a full 737 airplane into a mountain every single day for more than two years. I cannot fathom why combatting this disease is not an all-hands-on-deck national emergency.

When you do the division, this is the number you get: .000558327071016. I am not good enough at math to know exactly how to express this percentage in words. Clearly, though, 185,000 people is not a very big percentage of our total population. The number of those who have died from Covid-19 is much, much, much less than 1%. This may be the reason that the national government is not treating the pandemic as an "all-hands-on-deck" emergency. "All hands" don't seem to be threatened. The fact that the government has not developed a clear and effective response to the pandemic, and to its manifold health, social, and economic impacts, may also be attributed to the fact that the percentage of people actually dying from Covid-19 is small. Thinking in percentage terms, the pandemic is just not that big a deal. Lots of people do make that argument.

Of course, this approach raises a question. Should we really be using the percentage of the population affected by something to decide what the government should do? I believe that this specific example - the pandemic, and the government's response to it - illuminates a fundamental question about what sort of role we should expect the government to play in our lives.

One approach, founded on the undeniable fact that we are all "individuals," is to decide that we should all deal individually with our own problems and possibilities, to the greatest extent possible. The basic idea is that people need to work things out on their own. Government doen't need to get involved, really, unless the issues start affecting a large percentage of the population.

The other approach to government is much more "personal." That view of government is premised on the idea that "we're all in this together." That approach means that we should always be thinking about whether or not we, collectively, might be able to do something to be of assistance to those who have individual problems. This way of thinking about things suggests that the government should take action when "persons" start getting impacted, whatever percentage of the total population those persons may be. "Their" problems - the problems of individual persons in trouble - are actually "our" problems, if we genuinely consider ourselves to be "in this together."

Under its current management, the national government is not really that interested in assisting individuals with their problems - and when you start looking at it in terms of percentages, you can come to the conclusion that the pandemic really isn't that important. Clearly, our current president seems to take that approach. He keeps insinuating that the pandemic really doesn't exist, and I get the impression that he is quite irritated by those, like Richardson, who seem to think that the government should be doing far more than it is doing, and responding much better than it has responded so far.

As far as the president is concerned, the pandemic isn't that big a deal. To quote him: "it is what it is."

Billionaires, of course, can generally take care of themselves, so they don't usually think too much about what "their country can do for them." They don't need to! Similarly, those with a narcissistic personality disorder are, by virtue of their narcissism, particularly immune to thinking much about anyone but themselves. The kind of empathy that leads directly to a concern for other people can go missing in action when someone is ultra-rich, or when someone is a pathological narcissist. I would say that both those factors are currently in play at the highest levels of the national government. I think they help explain what has happened, as we ponder Richardson's question about why the government has not responded to the Covid-19 pandemic in an all-hands-on-deck manner.

More than anything else, this pandemic demonstrates, at least to my mind, that we have not, as yet - and speaking collectively - really mastered what it means to think of the government as "our" government, instead of "the" government.

When we have a government that is actually "our" government, and not just "the" government, then we will expect the government to respond positively and helpfully to each and every one of us. After all, it belongs to "us." It is "ours." When that understanding truly prevails, "empathy" will be the government's middle name.

But to make "the" government become "our" government, let's not forget that we need to be involved ourselves. To the degree we think "the government" is someone else, so that we don't take personal responsibility for the government on an individual basis, we won't see much need to get personally involved. If that is how we structure our relationship to government, we leave ourselves open to the situation we have today. The pandemic shows us what that is like.

In November, we are going to be making a major decision on how we proceed from here. Are we "all in this together," or not?

I would like to think we are. That is my view. I think "empathy" does need to be our government's middle name.

Do I need to remind everyone that the very minimum way we get personally and individually involved in "our" government is by keeping ourselves fully informed and voting?

No? I don't need to remind you? Great! But voting is just a first step; do let me remind you of that!