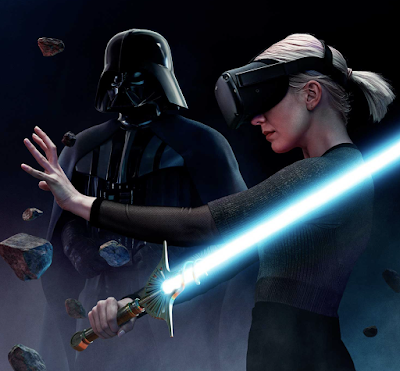 The Wall Street Journal says that Facebook has "a virtual reality hit on its hands." At least, that is what a recent article is prognosticating in one of its "comments on capitalism," as I tend to think of the articles that appear in The Journal.

Pictured above is a Star Wars fan using an Oculus headset. To be clear, Oculus does not market a light saber, just the headset. According to The Journal, that may be enough. The most recent Journal article hyping the Oculus headset ran on Tuesday, September 29, 2020. It includes a seven-minute video demonstration by a Journal columnist Providing you can slip past the paywall (difficult for me to tell, since I subscribe), you, too, can live in virtual reality. Just click to leave real life behind!

Facebook bought Oculus for $2 billion in 2014. As we all know, Facebook markets a social media platform, defined by software. Oculus markets a piece of physical equipment, the kind of Virtual Reality (VR) headset pictured above.

Why did Facebook buy Oculus? For six years, market analysts have been wondering. The Journal now provides the answer. The latest edition of the Oculus headset is no longer "tethered," meaning that the headset no longer needs to be attached by a wire to some piece of computing equipment as you use it. That will make a big difference in the appeal of these headsets, says The Wall Street Journal. Facebook/Oculus is going to sell a lot of headsets!

I don't prognosticate the markets, but I do think that the "untethered" version of a VR headset now does point to something that I am afraid may be transformative - and not in a good way. As we know, from either personal experience of from reading about it, many Facebook users start defining their life and their "friendship" relationships by what happens on Facebook, rather than by what happens IRL ("in real life"). Commentators are rightly concerned about this phenomenon, which is helping to transform our shared social and political world into an individual and private "social media" experience. Reality is being transformed into a "mediated" version of what we used to experience directly, with our physical senses.

Soon, looking ahead, we will be able truly to "live" outside what we now know as IRL, using the Oculus headset as a replacement for our human eyes. We will walk around looking like bugs. But the eyes of bugs are a mechanism by which insects can perceive the "real" world. Using a VR headset, we humans will be "improving" reality, by mediating what our eyes might otherwise see IRL to a version of reality mediated by Facebook/Oculus. 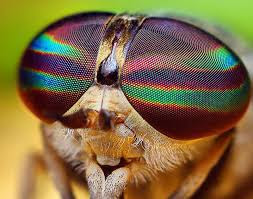 I, personally, think that the most serious challenge facing us, as human beings, is the challenge of understanding our true place in the "real world." The World of Nature preexists our existence and activity, and we are, ultimately, completely dependent on the World of Nature.

Despite this fact, we humans do also inhabit a world that we create for ourselves, a "Human World," a world that, in the end, is created by what I call "politics."

When we start "living" in a world that no longer allows us to experience the World of Nature directly, when we see everything through mediated, digital "eyes" that enhance and transform what is "real" into what we "really" want to see, I think we're gone.

Yosemite, or a "perfect picture" of Yosemite: which is better?

I think we need to live IRL/100% - which means we need an accurate understanding of what is happening in the World of Nature, and an understanding of the immense possibilities we can create in our Human World. Headset life attempts to replace that "Natural World" part of reality with a completely human-generated substitute. Take care!

You don't need to spend $400 and buy a VR headset to experience the reality of both of the two different "worlds" that we simultaneously inhabit. I want to suggest to you that the World of Nature, and our political and social reality, are actually going to be "better," and better for us, when we experience them directly, rather than through our Facebook/Oculus headsets! 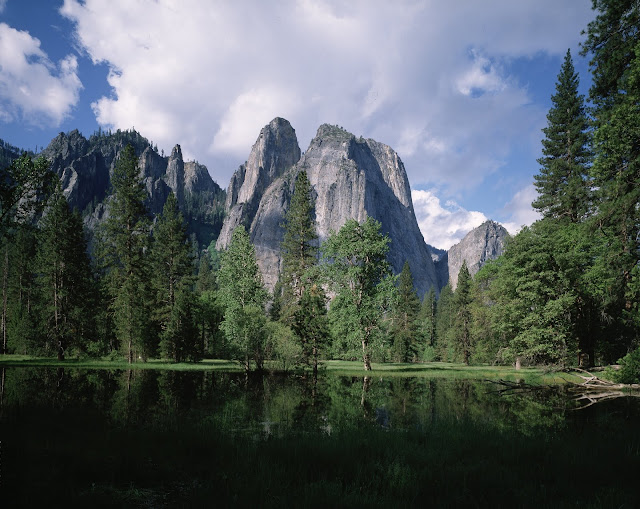