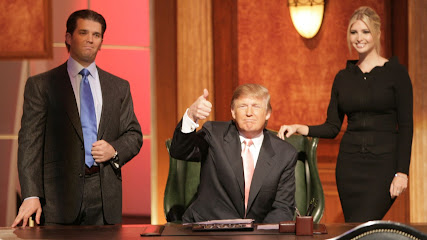 In my blog posting yesterday, I suggested that many of our newest technologies are helping to divorce us from the real world. I gave as an example Facebook's Oculus Virtual Reality headset. This high-tech set of goggles is able to immerse us in a world that appears "real," but that actually is not.
More and more, we live "online," or in "cyberspace." We have "Facebook Friends," for instance, who far outnumber our real friends and acquaintances - those people, in other words, with whom we meet and talk in real world environments. This is a different example in a different context.
Our discussions and disputes about social, political, and economic issues have also taken flight from the real world. Fantastic claims and assertions of all kinds have proliferated on "social media," and these have some rather disconcerting results. Extreme political polarization and the near-elimination, in some cases, of the kind of basic courtesy, politeness, and common human decency that ought to accompany communictions between people, have become ever more evident. Yes (among other examples), I am thinking about the recent presidential debate, held last Tuesday.
The Social Dilemma, a film that is available on Netflix, and which is a definite "must see," points out a number of the problems that have accompanied our flight from an "analog" world to a world mediated by the technologies that we are now employing to move our lives "online," and into "the cloud."
We can, and do, of course, derive immense benefits from these new technologies, upon which we depend more and more, but understanding the dangers these technologies pose is critically important. The stakes are very high, and the dangers are not theoretical. Confusion between what appears to be real and what actually is real is getting us into trouble.
Just how much this is true came home to me as I read a story on the front page of a recent edition of The New York Times. The article is titled, "Trump's TV Facade Rescued Finances And Aided His Rise," and it begins this way:

From the back seat of a stretch limousine heading to meet the first contestanats for his new TV show "The Apprentice," Donald J. Trump bragged that he was a billionaire who had overcome financial hardship.

It was all a hoax.

I would classify "The Apprentice" as an example of "Reality Television." Wikipedia defines that term as follows:

Reality television is a genre of television programming that documents purportedly unscripted real-life situations, often starring unknown individuals rather than professional actors. Reality television first emerged as a distinct genre in the early 1990s with shows such as The Real World, then achieved prominence in the early 2000s with the success of the series Survivor, Idols, and Big Brother, all of which became global franchises. Reality television shows tend to be interspersed with "confessionals," short interview segments in which cast members reflect on or provide context for the events being depicted on-screen; this is most commonly seen in American reality television. Competition-based reality shows typically feature gradual elimination of participants, either by a panel of judges or by the viewership of the show.

I think that the key word here is "purportedly." What we "see" seems quite real when we have our technological goggles on - either actually or metaphorically. But much of what we encounter online is not real at all. Those who watched "The Apprentice" came away with a rather positive, but misleading, impression of Donald J. Trump. His was purported to be an incredible business success, and that portrayal, on the television show, helped elect him President of the United States. That was a mistake. You could say the way he was presented on his TV show was a "hoax," which is exactly the judgment rendered by The New York Times. However, it was a hoax that all seemed real to lots of people, and then, as The Times does point out, the "hoax" turned into something like reality.
The fact that a television fantasy did turn into reality for Mr. Trump may help explain why our current president appears so psychologically disturbed - as when he claims that the coronavirus will simply "disappear," for instance. Charitably, our current president has learned, from his experience with "The Apprentice," that it is possible to transform a fantasy into a reality, just by acting it out. The Times' article makes quite clear that Donald Trump's huge business failures were overcome by his TV role. As he was reincarnated, on his show, as a brilliant billionaire businessman, the money actually started pouring in. The fantasy, in other words, turned into fact. Now, Donald J. Trump is starring in a new show, "The President," portraying a brilliant political leader.
Of course, he's not a brilliant political leader. He's the opposite. Maybe he thinks, though, based on his earlier experience, and since it worked on TV, that if he just proclaims himself something, reality will accommodate, and make it all come true.
It's not going to happen! That recent debate made that pretty clear - at least I think so.
I think it is time for us to start living in real life. That means, most immediately, that it is superlatively important that Mr. Trump, who is emphatically not a brilliant political leader, be overwhelmingly defeated in the upcoming election. We need, in this particular arena of politics, to proclaim our willingness to live in the "real world," rather than hoping that our fantastic desires will be transformed into reality by simply claiming that the fantasy is real. Large portions of the government (and I do include the majority of our United States Senators) are living as though fantasy can precipitate into reality.
It's not happening, and reality persists, and it's an impressively daunting reality!
We need to tear our eyes away from the spectacle. Take off the goggles! There is a big difference between "reality" and "reality TV." Thus, I have come to the following political conclusion:
Vote For Reality on November 3rd! 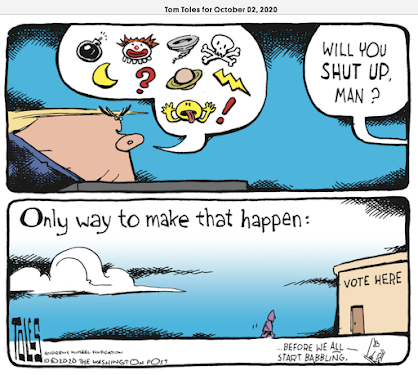