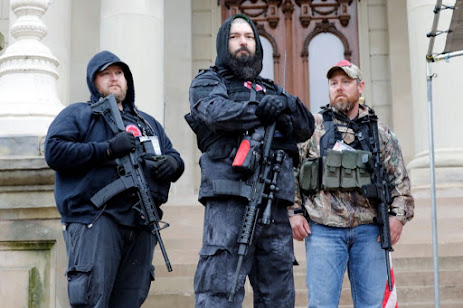 A "wargame designer" named Mike Selinker has decided that his professional expertise qualifies him to outline four different kinds of civil war, one of which we will almost certainly face rather shortly, the way he sees it:

Up until yesterday, I wasn’t thinking a civil war was probable. But then Supreme Court Justice Ruth Bader Ginsburg died. With her likely went the last chance the 2020 election will end peacefully.

Here are the four types of civil war that this wargame designer is envisioning:

How do we not give in, or see violence as the inevitable result of all the information and actions on the part of Trumpism that we know about at this point? Is there some kind of inevitability to what’s going on?

I apologize. I am sorry to do it, but please allow me to vent. When I got the posting from Selinker, accompanied by the message just quoted, I felt like I should yell at these people:
WOULD YOU PLEASE JUST STOP THIS!
Perhaps it is understandable why a person who dreams up "war games" for a living might be trying to dream them up in real life. Experienced political activists, however, should not be positing about "some kind of inevitability" when it comes to civil war.
As I am fond of saying in this blog, "nothing is inevitable." To suggest that we will soon be killing each other, and that "some kind of inevitability" might be going on, is to capitulate to  a prospect so filled with horror that it is almost too much to contemplate. If we really think that this is a possibility, we should be doing everything possible to prevent it from happening, not sitting on the sidelines doing commentary and analysis.
Telling people that a civil war is "inevitable," or even that such a civil war is "maybe" inevitable, is to make violent conflict ever more likely. Are we really thinking that this is a good idea?
I think any one of the four scenarios outlined by Selinker is possible: (1) A Biden blowout; (2) A narrorw Biden win; (3) A contested election, or (4) A Trump victory. That is pretty much the waterfront in terms of what we will see on and after November 3rd. One of those things is almost certainly going to happen!
That does not mean I am buying that civil war will be the result. Can't we all start telling ourselves that whatever happens, we will live through it and continue to work for the kind of democratic government and democratic change that we know, from both history and personal experience, is not only possible, but that is capable of transforming our world in positive ways?
Can't we, please, stop dreaming about a civil war? That's what the right wing militias are doing. No need to join them!
Once again, if you're in the business of designing "war games" as your job, it's clear why your mind might trend in the direction of envisioning such wars occuring in "real life." None of the rest of us need to go there. We must not go there! Civil war is not a "game."
We do need to be thinking of how to respond to whatever scenario identified by Selinker may come to pass - but let's think about nonviolent, positive responses - not responses in which we start killing each other.
Read my blog posting from this last Thursday for one approach. Go watch Eyes On The Prize, for other ideas. Eyes On The Prize documents how the Civil Rights movement used nonviolent action to change the course of the nation. We're going to need to do it again.
Killing each other won't win the prize. Only in video games. Never in real life!
So for heaven's sakes, friends, let's stop trying to talk ourselves into a civil war. OK?
Image Credit:
https://medium.com/@mikeselinker/a-wargame-designer-describes-our-four-possible-civil-wars-cf5b2e980099