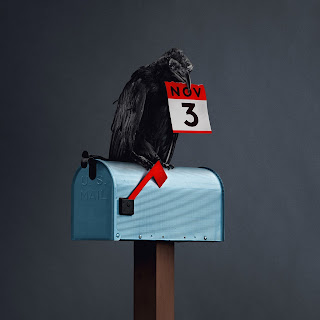 A rather terrifying article is set to appear as the cover story in the November 2020 edition of The Atlantic magazine.* Because the article is timely - and important - The Atlantic has made it available in a "special preview." Just click this link to read it. There may be a paywall problem that gets in the way, if you are not a subscriber, but see if you can track it down. It is not a short article, but it is a worthwhile one. There has already been quite a lot of press discussion about it.
The article I am referencing is by Barton Gellman, and is titled, "The Election That Could Break America." Essentially, the article examines how a president who is determined "never to concede" can bring the nation to a Constitutional crisis, with very uncertain outcomes. As you may have read in my blog posting yesterday, at least some people think that the expected outcomes aren't that uncertain at all. If the president refuses to concede, and plunges the nation into a Constitutional crisis, these people think that "civil war" will result.
I am arguing against that, of course. I refused to go to Vietnam to kill people, and I am not going to stand around and watch video games come to life in the streets of America - not without trying to stop that from happening, at least. I am of the opinion that there are a lot of people just like me. "Civil war" is not the right response to the kind of conflicts that Gellman identifies, even admitting that these potential conflicts pose truly terrible problems. Giving in and giving up to an authoritarian assertion of power isn't the right thing, either.
What, then, is the correct response? If an unconstitutional and illegal ururpation of democratic self-government is attempted, isn't resistance required?
Well, yes. I think it is, but let's get our definitions right. "Resistance" and "violence" are not the same thing.
One of the "Five Guys" upon whom I rely suggests "insistence" is the best form of "resistance." That's Gandhi, and I'm sticking with Gandhi and Martin Luther King, Jr., who was of exactly the same mind. Gandhi had a special word to describe the process he advises to combat injustice. "Satyagraha" is Gandhi's word. It means "clinging to the truth." It means "insisting" on what is right.
If the crisis comes, as Gellman suggests is a real possibility, we need to refuse to accede to what is not "true," and we are not limited to standing by and watching how democracy dies, either. In fact, we can "insist" that the right thing be done, and refuse to capitulate to any attempt to destroy our democracy by illegitimate claims and the imposition of force. Thousands and tens of thousands of nonviolent actions, as a response to an unjust and authoritarian claim of power, is the response that I propose.
Of course, that kind of response is the opposite of "passive." Ir requires us to set aside our normal activities, and it requires us to put our lives on the line too. We will do that, when the crisis comes,  only if we value our collective life together - our country - as a higher priority than our individual safety and convenience. Patriots have to be willing to die for their country, we're told. I think that's right.
But being willing to die for our country is a a lot different thing from being willing to kill for it. I am not going to kill for democracy, because that isn't how democracy will be preserved.
We need to insist that we will not tolerate the theft of our government. Insistence is resistance, and that's what we have got to be ready to do - clearly, forcefully, and for as long as it takes - if the worst thing happens.