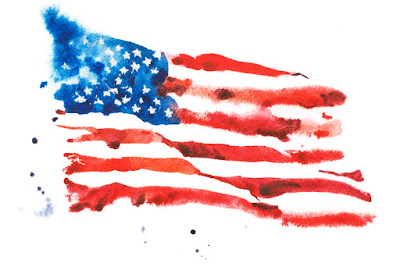 A few days ago, my magic inbox, which delivers way more material than I can read, gifted me with an article from Governing. The article asked readers to "Stop Pontificating About The American Dream." That might be a good idea - or maybe not. I decided to say something about that proposition.

Having made that decision, I then had to find a photograph to head up my blog posting. The one associated with the article in Governing was clearly not suitable. You can see that photo by clicking on the link to the article. It depicts a happy American family, a father, a blonde-haired mother, a son, and a daughter, gathered in a nice living room (circa 1950, with a rotary dial telephone clearly visible). Everyone is paying great attention to the father, who is introducing the family to the wonders of television. I well remember my father doing the same thing for us, when our family got its first television.
Except for the fact that my mother was a brunette, not a blonde, this was a real scene from my past!

Given that the family depicted in the Governing illustration is all white, I decided that anyone seeing that photograph at the top of my blog posting might (erroneously) conclude that I am dreaming of an America where Black people just don't get seen. That is not really my idea of "The American Dream."  Quite the opposite, in fact. I felt compelled to look elsewhere for an illustration. This brought me to an article by Mark Manson, an author who promises "Life Advice That Doesn't Suck." He tells us that "The American Dream Is Killing Us." Assuming that he was going to be critical of our habits of over-consumption, I thought his article might be a better reference point. I got the tattered flag image from him.

IT MAY SEEM THAT AMERICAN DREAM FANTASIES must date back to the founding of the Republic, but in fact they are a modern conceit. The phrase "American Dream" was first used in 1931 by the historian James Truslow Adams in his book The Epic of America. It meant, he wrote, "that dream of a land in which life should be better and richer and fuller for everyone." Better and richer and fuller in what way? He didn't say. Maybe in the middle of the Depression it seemed obvious. It doesn't seem quite so obvious now.

Manson makes explicit what is implied in the article in Governing. In Manson's telling, there is no question about it. "The American Dream" is all about money, possessions and, yes, real estate:

The American Dream is simple: it’s the unwavering belief that anybody — you, me, your friends, your neighbors, grandma Verna — can become exceedingly successful, and all it takes is the right amount of work, ingenuity, and determination. Nothing else matters. No external force. No bout of bad luck. All one needs is a steady dosage of grit and ass-grinding hard work. And you too can own a McMansion with a three-car garage… you lazy sack of shit.

As I have mentioned before, my father always told me, "If you don't have a dream, Gary, you will never have a dream come true." Steeped in this wisdom from an early age, I am reluctant to discard "dreaming." I do have an observation, however, about that "American Dream" idea.

As can be noted in both the Governing article and the Manson article, the so-called "American Dream" is historically portrayed in individualistic terms. It isn't, really, so much an "American" dream that we are talking about; it's a dream that individual persons can make more money, and buy bigger houses. That kind of "American Dream" is, I would have to agree with Manson, "killing us." I am in agreement with Governing, too, that we ought to stop "pontificating" about that idea.

But what about a dream that was truly an "American" dream, a dream for us all, together? What about the idea that we ought to be dreaming about how to make real the promise of the American Revolution? That is what I think is the genuine, and true, and appropriate "American Dream."

We hold these truths to be self-evident, that all men are created equal, that they are endowed by their Creator with certain unalienable Rights, that among these are Life, Liberty and the pursuit of Happiness.--That to secure these rights, Governments are instituted among Men, deriving their just powers from the consent of the governed, --That whenever any Form of Government becomes destructive of these ends, it is the Right of the People to alter or to abolish it, and to institute new Government, laying its foundation on such principles and organizing its powers in such form, as to them shall seem most likely to effect their Safety and Happiness.

Like my Dad always said, "if you don't have a dream, you will never have a dream come true." So, let's not stop dreaming about that truly revolutionary idea, presented above, articulated in The Declaration of Independence.
By the way, my Dad didn't mean "wishing" when he said, "dreaming." He meant "working at it."

As long as we have all our definitions right, I say, "Dream On!"