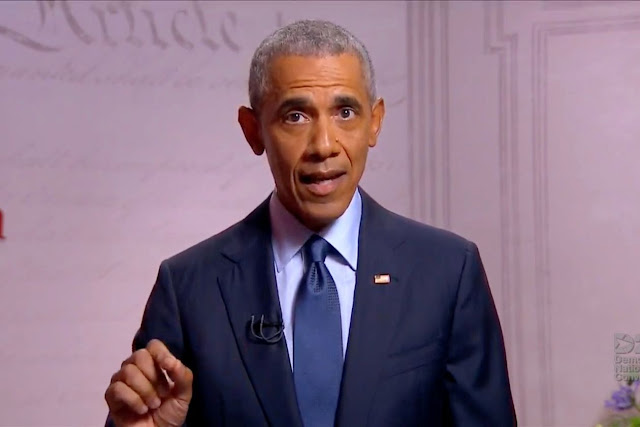 Given the timing of the column, and the topic, you will immediately understand that Noonan's column was a critique of the way the Democratic Party presented itself through the four days of the Convention. I have done my own critique, which does make a point that Noonan also makes. This so-called "Convention" was, really, an extended political advertisement. Here's how Noonan puts it:

To be fair in critiquing certain public events you have to be like a judge in the Olympics and factor in degree of difficulty. No one had ever done a Zoom convention before, so no one knew how to do it. Should there be a host each night? Should it be an earnest actress? Does that make us look shallow? Do we want to look shallow?

What hadn’t been done before was done rather poorly, with high schlock content. You got the impression no one creative or daring was authorized to be either. It has been compared to a telethon, an infomercial, and fundraising week on public television. Marianne Williamson said it was “like binge watching a Marriott commercial.” Mostly it was the Democratic Party talking to itself and playing to its base (emphasis added).

I confess that I have something of a soft spot for Peggy Noonan, despite her right wing and Republican Party allegiences (Noonan was a speechwriter for Ronald Reagan, among other things). What I find appealing in Noonan is that her columns, almost always, seem directed to everyone, not just those on the righthand side of the political spectrum. At least, that's how she tends to come across to me.

When someone is attempting to speak "to" me, and not just "at" me, and this is the way I think about Noonan, I like to believe that I am willing to listen. Theoretically, at least, we shouldn't write off the views of anyone; we should be willing to listen to everyone; however, it's easier to do that when the person you are listening to seems, genuinely, to want to include you in the discussion. Again, I do get that feeling when I am reading what Noonan writes. I don't always agree with Noonan, by any means, but I am almost always willing to listen to her point.

The picture above, of President Barack Obama, was featured as an illustration in the column that I am referencing. President Obama, in my opinion, also comes across, at least to me, as someone who is seeking to talk to everyone, not just those in the political party with which he is associated. If those who are not Democrats routinely discount and ignore what President Obama has to say, and I think many of them do, it is my belief that race is a factor in their dismissive treatment of our former president. The way I see it, President Obama is consistently talking "to" the American people, and to all of them, and not just "at" them. Noonan would seem to agree, in her review of Obama's Convention speech:

Barack Obama’s speech will stick in history; it won’t just slide away. No former president has ever publicly leveled anything like this criticism at a sitting successor: “I did hope, for the sake of our country, that Donald Trump might show some interest in taking the job seriously, that he might come to feel the weight of the office and discover some reverence for the democracy that had been placed in his care. But he never did. For close to four years now, he has shown no interest in putting in the work.”

This is a former president calling the current one shallow and lazy. He also suggested he’s greedy and intellectually incapable. Unprecedented? Yes. Unjustified? No, alas. And I’m not seeing Trump supporters rise up in indignant defense. They know it’s true, too (emphasis added).

So, what was Noonan's major critique of the Democratic Party Convention? If Noonan is willing to listen to President Obama calling the current president "lazy," "shallow," and "intellectually incapable," what are we willing to hear from Noonan?

Noonan's point was that the Democratic National Convention did not speak to what everyone in the country is actually worried about:

Do the Democrats understand how hunkered-down many people feel, psychologically and physically, after the past six months? If I asked this right now of a convention planner or participant I think they’d say, “Yes, people feel battered by systemic bias, inequality, and climate change.” And I’d say no, they’re afraid of foreclosures! They’re afraid of a second wave, no schools, more shutdowns, job losses and suddenly the supply lines break down this winter and there are food shortages.

In short, Noonan is suggesting that the Democratic Party seems afraid to focus on policy. As a Bernie Sanders supporter, that does tend to ring true to me. Here is how Noonan expresses it:

First, Democratic Party professionals are funny about policy. They take it seriously but don’t think other people do. The past three decades they wound up thinking all politics is about glitz, emotion and compelling characters. Part of the reason they’re like this is they never thought Republicans were serious about policy, because if they were, they’d be Democrats. They find it hard to credit the importance of policy in the making of a party’s fortunes. They thought Republicans liked Reagan because he was handsome, and George H.W. Bush because he fought in the war. But their elections were policy victories. Charm and humor, stagecraft and showbiz matter, but they’re not everything. They’re not even half of everything.

Because boomer Democrats thought Republicans won on glitz, they got glitzy in return. It was the central Clintonian insight of 1992: We have to become actors, like the actors we seek to replace.

It only made politics worse and left Democrats unable to speak in public forums of the central point of politics: why you stand where you stand and what you intend to do.

(Fairness forces me to note that socialists love talking about policy, and so does Elizabeth Warren. And that Republican political operatives, as a class, are naturally hostile to the meaning of anything.)

Second, apart from the “We The People” gauziness, there was a nonstop hum of grievance at the convention. To show their ferocious sincerity in the struggle against America’s injustices, most of the speakers thought they had to beat the crap out of the country—over and over. Its sins: racism, sexism, bigotry, violence, xenophobia, being unwelcoming to immigrants. The charges, direct and indirect, never let up. Little love was expressed, little gratitude. Everyone was sort of overcoming being born here.

Even Mr. Obama, trying, in a spirit of fairness, to expand the circle of the aggrieved, spoke of “Irish and Italians and Asians and Latinos told: Go back where you come from. Jews and Catholics, Muslims and Sikhs, made to feel suspect . . . black Americans chained and whipped and hanged. Spit on for trying to sit at lunch counters, beaten for trying to vote. . . . They knew how far the daily reality of America strayed from the myth.”

The cumulative effect of all this, especially for the young, would prompt an inevitable question: Why would anyone fight to save this place? Who needs it?

If I were 12 and watched, I’d wonder if I had a chance here. If I were 20, they’d have flooded me with unearned bitterness.

Injustice is real, history is bloody. But guys, do you ever think you’re overdoing it? Are you afraid that this is all you got? Is that why you don’t talk about policy?

I am a Democrat. But I like to think I can listen to criticism and learn from it when it's justified. I believe that Noonan is saying something important.

If Democrats want to prevail in this coming election, justified grievance and the inadequacy of the current president are not going to be enough to win the contest.