#242 / Fact Checking The Text Will Not Be Enough 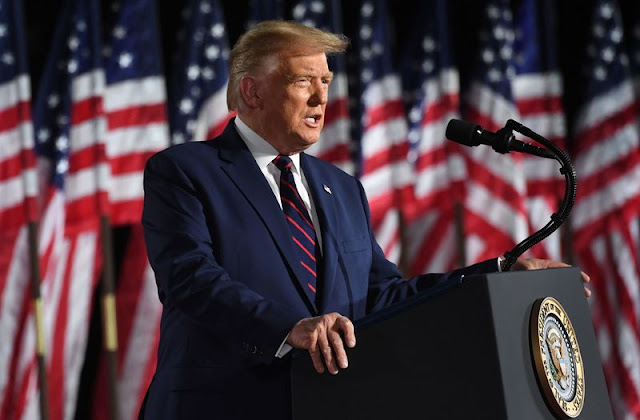 I watched President Trump's acceptance speech to the Republican National Convention. You can click that link, above, to see him deliver this speech yourself.

This link will take you to the text of the president's speech, fact checked and annotated by reporters from National Public Radio. Lots of others are fact checking, too. In general (no surprise) the speech is not getting very good grades for veracity.

The president's speech was presented to a hugely enthusiastic audience gathered on the South Lawn of the White House (and let's be clear, the crowd was definitely not observing health advisories that tell us that large assemblies are contraindicated during our current coronavirus pandemic).

Afterwards, the president's speech was followed by one of the most impressive fireworks displays I have ever seen, centered on the Washington Monument, and clearly visible from the South Lawn. As the fireworks came to a close, they spelled out "TRUMP," making the implicit claim that our nation's capital, and all of its official buildings and monuments, are all now subsidiary to the TRUMP brand. The Hatch Act be damned, Donald J. Trump "owns" our government. That really is the claim. 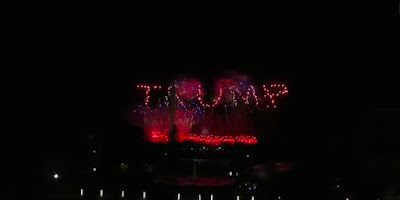 The day after the president's speech, The New York Times carried an article asking this question: "What if the Right Wing on Facebook Is the Real 'Silent Majority'?" As ever, let me warn you about the paywall that non-subscribers will probably face when they try to read this article. If you can read it, though, I encourage you to do that. It is disturbing in exactly the same way that the president's speech and fireworks show were disturbing to me: "What if this guy is actually going to win, again?" What if Donald J. Trump's implicit claim to "own" our government turns out to be a pretty accurate statement of where we really are?


If you check the text of the president's speech, you will find misstatements galore. As one example, the pandemic hardly even exists, to hear the president tell it. And there will be a vaccine by the end of the year.  No doubt about that. And etc.


The president is not worried about the "facts." He is aiming to conjure up a world that a majority of Americans will recognize as the world in which they want to live, and to make clear that this is exactly the world that he will try to create. I, personally, was not beguiled, but I thought the president's speech was very well-designed to beguile others. MANY others: Honest, good people. People hoping for a better future. Americans who love our country. Hardworking Americans who honor hard work. Americans who value law enforcement and place a high priority on public safety and public order. People who don't have much faith in the national government, and who think their taxes are too high. MOST people, in other words.

Carl Sandburg is quoted as follows:

As a lawyer, I know this principle very well. As a politician (for I still self-identify as such), I know that the exact same principles apply in the world of politics. This is a formula for success. Trump argues the facts when he can. Since he often can't, he argues the political principles upon which most Americans agree. And he certainly pounds the table! Watch his speech; you'll see what I mean.

I am nervous about this upcoming election. Both Joe Biden and Donald Trump say the same thing; this is going to be the most important election in our lifetimes. They are both right about that! Checking the facts, and proving the president is full of it, won't be enough. Those who want change are going to have to outdo the president in inspiring the American people.

My bottom line recommendation? Don't underestimate what we're up against, here!