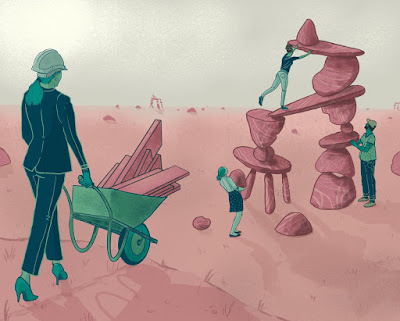 Spend More on Society and Get More for Yourself

That was the headline on an article published in the July 16, 2020, edition of The New York Times. I am not sure I have much to add.

We are all "individuals," but we are not only individuals. We are inevitably bound to others, and when we recognize this fact, and act accordingly, we are all better off.

Robert H. Frank, a professor of economics at Cornell University, made this point in The Times' article. The Times put the following subheading at the top of Frank's presentation:

The coronavirus crisis demonstrates a basic truth. American individualism has made individuals unhappy and, too frequently, sick. There is another way, an economist says.

Here is Franks' presentation in its entirety.

Again, I am not sure I have much to add!

As the mounting death toll and job losses from the coronavirus have made clear, the United States would be in far better shape if it had invested more heavily in public health, as well as in the country’s aging infrastructure and porous social safety net.

But crises don’t just highlight institutional failures. They also identify opportunities. The pandemic is no exception. It suggests ways in which different spending patterns could improve both the health and well-being of almost everyone in America.

In the pre-pandemic world, it proved impossible to muster support for increased public investment. But immediate threats to health and livelihoods are already changing popular attitudes and spending patterns.

The lockdowns, quarantines and social distancing have reaffirmed a central finding from the large literature on the determinants of human well-being: Beyond a point long since passed for prosperous Americans, increases in many forms of private consumption have little impact on health or happiness. They merely raise the bar that defines adequate. If all mansions were double in size, for instance, those who lived in them would be neither happier nor healthier than before.

Although there are good reasons to lament the restrictions on mobility and social interaction during the pandemic, no evidence suggests that the interruption of longstanding personal consumption trends has been a significant source of discontent. Unemployment and recession have had an enormous human cost, but when growth resumes at the pandemic’s end, there will be an opportunity to steer additional resources toward long-neglected public investment without having to demand painful sacrifices from voters.

Proposals for such a shift will of course not command unanimous approval. For one thing, shibboleths about individual liberty will continue to dampen enthusiasm for increased public investment. People naturally want to be free to choose how to spend their earnings — and many people object when more of those earnings are spent by government. Yet the pandemic demonstrates that the desire for personal freedom doesn’t confer a right to cause undue harm to others.

As John Stuart Mill, the political economist and champion of individual liberty, wrote, “The only purpose for which power can be rightfully exercised over any member of a civilized community, against his will, is to prevent harm to others.” The pandemic reminds us that intent matters little. Unmasked people typically don’t intend to infect others, for example, yet the harm they cause fully justifies a mask requirement under Mill’s framework.

In similar fashion, private spending decisions often cause harm to others, even when no harm was intended. Bidding for houses in better school districts is perhaps the clearest case in point. As the economist Fred Hirsch wrote, “The value to me of my education depends not only on how much I have but also on how much the man ahead of me in the job line has.”

That simple observation helps to explain why parents bid vigorously for houses in more expensive neighborhoods, where better public schools almost invariably are. But that has only increased housing prices in those neighborhoods. Half of all students still attend bottom-half schools, just as before. This dynamic has made life more difficult for millions of families, even though nobody intended to cause harm.

Growing recognition that pre-pandemic spending patterns have served the country poorly portends increased support for public investment in the future. Yet when individual and collective spending incentives are deeply in conflict, mere exhortations to spend differently won’t suffice.

That’s because the incentive gap that causes individual and collective spending decisions to diverge sharply is identical to the one that drives military arms races. Although mutual escalation of arms spending typically does nothing to enhance collective security, that knowledge alone rarely inhibits rival nations from stockpiling weaponry. To achieve mutual reductions, they need enforceable agreements.

Fortunately, a simple, efficient remedy for the consumption arms race is at hand. Higher taxation of the country’s top 1 percent of earners (2019 family threshold: more than $475,000) would reduce high-end private consumption. And when people at the top of the income distribution spend less, the frames of reference that shape spending decisions of those just below shift accordingly, and so on, all the way down the income ladder.

Each reduction in growth of private consumption would free up resources for additional spending on public health, climate mitigation, transportation and other neglected public needs.

Many wealthy voters have resisted higher taxes, in the common belief that they would make it harder to buy life’s special extras. But that belief is a garden-variety cognitive illusion.

Because truly special things are inherently in short supply, getting them requires outbidding others who want them. But when taxes on top earners go up in tandem, relative bidding power is unchanged. In the wake of a tax increase, therefore, the same scarce luxuries would end up in the same hands as before.

Since the time of President Ronald Reagan and Prime Minister Margaret Thatcher, public policy choices have been heavily shaped by the belief that private markets harness unfettered self-interest to produce the greatest good for all. This view is often erroneously attributed to the economist Adam Smith. He explained that markets often did promote broad social ends. But as he also knew well, they don’t always behave this way.

In “The Wealth of Nations,” for example, Smith advocated taxing the opulent mansions of the wealthy to discourage “the luxuries and vanities of life.” He would have recognized that in modern, high-income societies, the spending interests of individual consumers are nowhere more at odds with broader societal interests than in domains like public health and climate mitigation.

As the pandemic recedes, therefore, legislators will face a choice between two starkly different futures.

In one — call it Society A — $50,000 cars, 4,000-square-foot houses and $40,000 weddings would soon be the norm. This society would invest little in hospital surge capacity, medical research, green energy and infrastructure.

In the other — Society B — private consumption would be lower, with $25,000 cars, 2,500-square-foot houses and $15,000 weddings the norm; but public investment in this society would be substantially higher than current U.S. levels.

Findings from decades of careful research in behavioral sciences are helpful in thinking about the choice between these two societies. These findings, which are consistent with recent experience under the pandemic, support two robust conclusions:

People would be both happier and healthier in Society B.

The additional tax revenue to finance the investments necessary to sustain Society B would require fewer painful sacrifices than most people think.

There will be many candidates who favor a version of Society A on this November’s election ballots, and many others who favor something much closer to Society B. Which society a future America will resemble more closely will depend largely on which candidates voters choose.