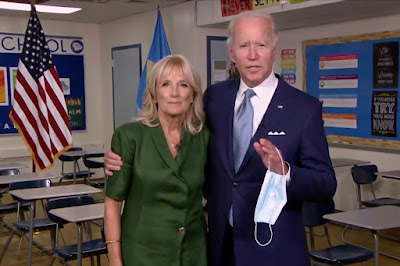 There are various ways to watch the Convention. YouTube provides various links, and the link above is the official Democratic Party gateway to  Convention activities.

Before the coronavirus made large indoor gatherings an invitation to extend and perpetuate the current pandemic, the Democratic Party had planned to hold a "live," in-person event in Milwaukee, Wisconsin. What the Convention has turned out to be is something else, an extended, tightly scripted, television advertisement.

I do not mean, by saying this, that watching the Convention is not worthwhile. I have found it to be quite worthwhile, but a viewer has to understand that elements of contingency have been minimized, while basic advertising principles have been maximized.

The photo above shows one relatively "unscripted" moment (or, at least, a moment that was not prerecorded, and thus had had some element of contingency to it). At the end of the second day of the Convention, Jill Biden, Joe Biden's wife, made a live presentation from her former classroom in a Delaware high school where she had once taught. At the end of her remarks, Joe Biden suddenly bounded into the picture, to give her a hug and a kiss.

The kiss could have been "scripted," but it wasn't prerecorded, and neither were Joe's very brief remarks, which (unlike a lot of the other remarks made during the Convention) didn't appear to have been read off a teleprompter. Thus, Joe either forgot to utilize the phrase that has been omnipresent throughout the Convention so far - or he simply didn't want to say it - since just about everyone else, from former President Bill Clinton on down, has used almost identical language to claim that when Joe Biden is elected he will "build it back better."

Again, don't get me wrong. I think it is helpful to see what message the Democratic Party is trying to send to voters. The "build it back better" phrase is an effort to indicate that the Democratic Party is dedicated to doing what I sincerely think most Americans want. They want two, somewhat contradictory things, simultaneously.

First, I think most Americans want to recapture some sense of the stability that at least seemed to exist before our current president took office. Clearly, our current president is totally unwilling or unable to commit to anything like stability or consistency, and so getting back to the status quo ante Trump is something that many Americans profoundly wish for. On the other hand, and this is related to our second desire, we know that the past was not all that great. There was no "golden age" before Trump, and he was undoubtedly elected because there was such great dissatisfaction with the state of the union prior to the 2016 election. Lots of things weren't working well. Health care is an example, and massive economic inequality is another, and any suggestion that we'll go right back to a time when police routinely kill Black people at traffic stops is totally unacceptable.

"Build it back, better," then, is one way to indicate that the Democratic Party understands the legitimacy of both of the impulses referenced above. We want to "get back," but it better be better.

The need to "unify" the Party (and the country) is the other theme that has been very prominent throughout the Convention. The New Yorker published a commentary by Benjamin Wallace-Wells under this headline: "Joe Biden, Alexandria Ocasio-Cortez, and the Shaky Unity of the Democratic National Convention." I think Wallace-Wells' article is worth reading. Here is how he ended his analysis:

At the end of the video, Joe Biden appeared in the classroom, “surprising” his wife with a kiss, a mask dangling from his hand. Biden may well be the last liberal of his generation to be nominated for President, and what his candidacy has shed, above all, is the old Clintonite triumphalism. The official theme of the night was repair, and this, too, has a generational element. Biden is asking for the chance to fix what his generation has broken.

Right. That is exactly what Joe Biden is asking for, a chance to fix what is wrong with the country - including what was wrong with it before Donald J. Trump took office, and when Biden was Vice President. But "fixing" what has gone wrong absolutely cannot mean going backward. We have got to do better than that. I liked what Wallace-Wells said about the precedents, within the Democratic Party, that indicate that there is some hope that this might be possible:

Ocasio-Cortez is often said to embody a generational break with senior Democrats. “In any other country, Joe Biden and I would not be in the same party,” she told New York, in January. But she also represents a suppressed strain. Watch the network coverage of the 1988 Democratic Convention and you’ll find that the standout performer wasn’t Michael Dukakis, whose acceptance speech was dull, or Clinton, then the governor of Arkansas, who spoke for thirty-three minutes and “completely lost this crowd,” in the words of Chris Matthews, then a young NBC reporter on the floor. (Biden, who was feuding with Dukakis’s campaign, missed the Convention because he was recovering from surgery for a brain aneurysm.)

The obvious star was Jesse Jackson, then forty-six and the embodiment of a rising multiracial progressivism, having won nearly seven million votes and eleven contests in the primaries. “For almost eight years, we’ve been led by those who view social good coming from private interest, who view public life as a means to increase private wealth,” Jackson said. “We believe in a government that is a tool of our democracy, not an instrument of the aristocracy in search of private wealth.” Of all the talented speakers at that Convention, it was Jackson who would fit seamlessly onto the virtual stage of 2020 (emphasis added).

Listen to Jesse Jackson. He was so correct in what he said in 1988. A politcal, economic, and social policy that is based on the idea that "social good [comes] from private interest," is exactly what has been wrong with the politics of this nation since the so-called "Reagan revolution," which repudiated the New Deal and claimed that "government is the problem." That analysis, and all the actions based upon it, has gotten us where were are now. That analysis was and is wrong.

We are not just a bunch of isolated individuals. We are together in all we do - or if we aren't, we are going down in the flood; we will be consumed by the fires!