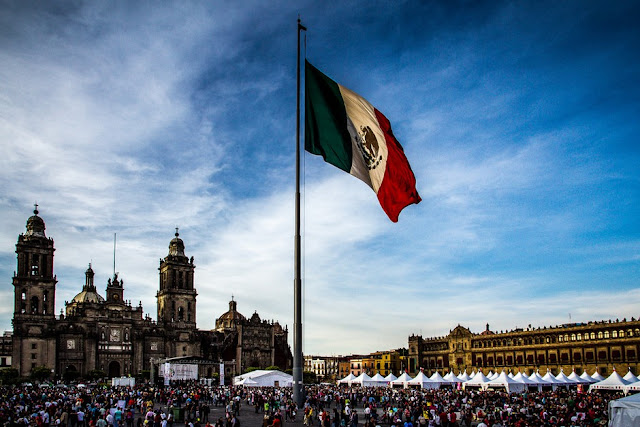 Does Mexico actually have something to teach us about self-government? That is what Joe Mathews contends. Mathews writes columns for the San Francisco Chronicle, among other things, and on February 22, 2020, he made the case that "Mexico City Should Be California's Capital."

Mexico City was California's national capital for one quarter of the 19th Century, as Mathews points out, and Mathews is wishing it could be California's capital once again. Here is some of his reasoning:

I’ve been visiting Mexico City regularly to plan a direct democracy conference there ... and ... I wonder whether Mexico City’s advances in democratic sovereignty might inspire Californians as we defend ourselves against the U.S. government.

Until the past decade, Mexico City and Washington were both federal districts — the Distrito Federal and the District of Columbia — with limited local power. That’s still true in D.C. But in recent years, Mexico City has established itself as its own Mexican state. This new state needed a new constitution ... so Mexico City embraced an unusually participatory process, with a constitutional assembly of citizens and an online method that allowed citizens to propose constitutional provisions via Change.org ... In the end, online proposals on parks, gay rights and disabled rights were included in the constitution, [which] created openings for forms of participatory and direct democracy, like the ones we use in California. But the document went even further, giving mayors and city halls to Mexico City’s 16 alcadías, or boroughs, and giving neighborhoods more control over public resources. This structure is already producing more small public spaces, and greater attention to neighborhood concerns. Imagine how transformational this model might be in California, where local communities suffer under a governing system that centralizes power in Sacramento ...

Another constitutional article, “Global City,” commits Mexico City to “peace, solidarity, hospital and asylum” and to cooperation with other cities and countries on international initiatives. If only California had a national capital with that welcoming policy, instead of a Washington committed to nativism and protectionism.

If the Chronicle's paywall prevents you from reading the rest of Mathews article, you can get an even more extensive explanation of Mexico City's new constitution by clicking this link, to access an article in CityLab by Gregory Scruggs. If you can read Spanish, you might also want to read the new constitution itself, dated 5 de Febrero de 2017.

What Mathews likes most is the citizen participation process that led to the adoption of the new Mexico City constitution. Plus its commitment to what we have always called "local control." In fact, I have mentioned Mathews' commitment to local control in an earlier blog post, too.

I would also like to think that we have not forgotten about the advantages of what we used to call "local control." That principle of "local control" asserts that many of the opportunities we have, and many of the challenges we face, are best addressed by local government, as long as local government is able to command the resources necessary to take action. Why is "local control" better? Well, because it is at the local level that ordinary persons can actually be effective, and so that's where self-government can best produce its benefits.

If we have forgotten those lessons - and I must admit that there are some good reasons to believe that we might have - then I think both Mathews and CityLab are on to something, and it's time we took some lessons from Mexico!