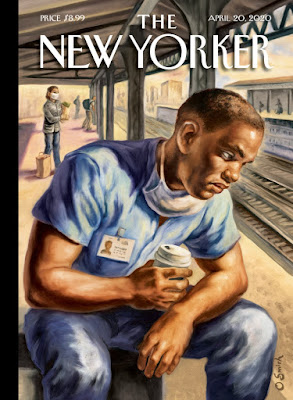 A reader contacted me after the publication of my blog on Monday. That Monday blog posting was titled, "Balm Of The Moment," and featured remarks by David Remnick, the Editor of The New Yorker. I quoted Remnick with approval, and most specifically quoted with approval his statement that "we are all in this together." That is the statement that Remnick called the "Balm of the Moment." Here is how the statement appeared in my earlier posting, as attributed to Remnick:

We are in this together: that is the phrase, the balm, of the moment. But it is more than a cliché. It should be the spirit and the foundation of our national politics, starting with the election in November.

Immediately following this quotation, I concluded my blog posting on Monday with a picture of the cover of the April 20, 2020, edition of The New Yorker, which is the edition from which I took the Remnick quote. You can see that cover at the top of today's blog posting. That picture of the cover caused what I would characterize as an "adverse" reaction to what I had to say on Monday, because the truth conveyed by the cover is clearly at odds with the claim that "we are in this together."

In fact, as my complaining reader objected, we are NOT "in this together." My reader pointed to the magazine cover as a demonstration of what is true in fact. Some are being devastated (check out that cover) while others are doing just fine, thank you! Those who are not doing fine tend to be poor and non-white. We may have been "created equal," as the Declaration of Independence proclaims, but we are definitely not treated equally by our government, and we are not "in this together" in any immediate way.

That was my reader's reaction.

I must say that I can't help but agree that we are not "in this together" in the sense that we have been similarly affected by the coronavirus pandemic, or by the economic, social, and political arrangements that govern our lives in the Unted States of America today. My reader is right.

I frequently say that "we are together in this life," or that we are "in this together," meaning, as John Donne said:

No man is an island entire of itself; every man

is a piece of the continent, a part of the main;

if a clod be washed away by the sea, Europe

is the less, as well as if a promontory were, as

well as any manner of thy friends or of thine

own were; any man's death diminishes me,

because I am involved in mankind.

And therefore never send to know for whom

the bell tolls; it tolls for thee.

I will stick by this judgment. Lest I be misunderstood, however, it is precisely because we are "in this together," in an ultimate sense, that the racial, gender, economic, national, and other distinctions that separate us must be set aside (must actually be overcome), so we can realize the "real truth" of our human situation. I think Remnick made his remarks in this same spirit, as he said that the assertion that "we are in this together ... should be the spirit and the foundation of our national politics (emphasis added)." I think he is right. It should be!

The issue is not one of whether or not we should articulate what some might think are pious hopes, in conflict with inevitable realities. I am firmly convinced that if we don't make this phrase ("we are in this together") into the kind of  operational "reality" that would satisfy my reader, it will not just be "clods," poor and disadvantaged individuals, who will be washed away in what is coming.

If we don't realize, in time, that we are truly "in this together," in the ultimate sense of what that phrase means, and if we don't then take action based on this realization, it will be the entire continent of our human civilization that will disappear, incinerated by the flames of advancing fire, parched by drought, and drowned by the waves of a rising flood.

This future is exactly what global warming is bringing to us, and no single individual, even the wealthiest, can beat back those flames alone, can make water flow when no snow falls, can turn back the rising sea.


We are in this together