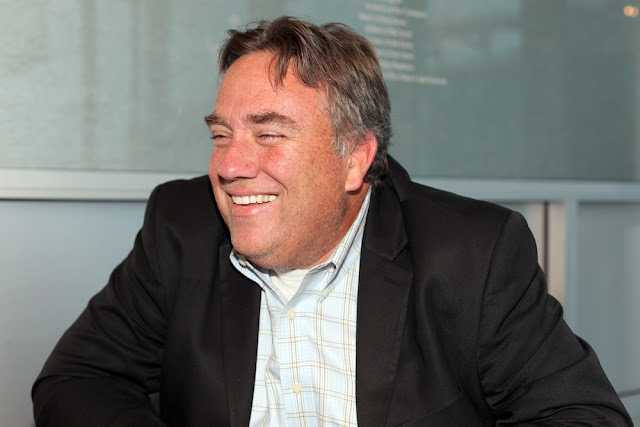 Pictured above is political columnist Joe Mathews. He is, among other things, California editor at Zócalo Public Square. Mathews is "a fourth-generation Californian ... and ...  is co-author, with Mark Paul, of California Crackup: How Reform Broke the Golden State and How We Can Fix It (University of California Press, 2010)." I am quoting from the biography which I have linked to Mathews' name, above.

On January 3, 2020, the Mercury News ran one of Mathews' opinion columns, structured as an effort to do "predictions" by way of a supposedly retrospective contemplation of times that are actually yet to come. In this case, Mathews' column was a letter "To my three sons," evaluating "How the Roaring 2020s unleasahed California's potential." This letter from a predicted future was signed off with the following closing: "Love, Dad."

During the 2008 Great Recession, California had considered replacing its old constitution, which made governing in crisis impossible, with a new system. But elites instead decided to make budget cuts and suffer through the pain of unemployment and foreclosures. But by 2021 it was clear that a new governing system was needed to give Californians the agency to deal with our problems.

Looking back, the biggest driver of change wasn’t self-driving cars but the new constitution, approved by voters in 2022. Crucially, this constitution took powers away from state government, freeing communities to govern themselves.

The effect was startling, rapid and deep. The state’s regions quickly accelerated housing, remade transportation and transformed economic development. In one constitutional moment, so many pent-up ambitions were unleashed that the entire state roared with invention.

In retrospect, we should have seen the potential within ourselves. As a California columnist then, I marveled at local communities—from West Sacramento to Glendale—that made progress despite structural obstacles. Even in pessimistic 2020, Fresno was making itself our next great city, and Los Angeles was so boldly rebuilding transit that Boston and New York took notice (emphasis added).

Genuine "self-government," I am convinced, does unleash and magnify our ability to meet challenges and create positive new social, economic, and political realities. Speaking from my personal experience, hugely transformative changes can and will occur when the practices of self-government are mobilized at the local level.

As a prediction, I wouldn't bet on Mathews' suggestion that power is shortly going to be restored to local government. In fact, the State Legislature has been stripping local communities of any ability to make their own rules, and solve their own problems in their own ways. In no area of public policy is this clearer than in the area of land use, which used to be specifically delegated to local authorities. Most recently, California cities and counties have been stripped of the power to create and implement the kind of land use regulations that determine what sort of development happens at the local level.

If I were writing one of those "retrospective prediction" letters to my own kids, I would not encourage them to believe in Mathews' vision as any kind of reliable prediction. "Don't bet on it, kids," I would tell them. What Mathews postulates in his own letter is not going to be a reliable assurance of things to come. You can't assume that Mathews' visions of the future are certain to happen, as though history could be counted on to conform to what would be our "best" result.

Nope, kids; there is no guarantee, whatsoever, that what Mathews has predicted for us is what will happen in fact. His list of predictions, however, does name one kind of governmental change that would help us meet the challenges we face today, and that we will continue to face tomorrow. Restoring power to the local level could really help create a different and better future.

That's a great idea, kids, but it is just not going to happen automatically. You will have to get engaged yourselves - and that can be translated into a general comment. Don't you ever assume that something "will" happen. MAKE it happen!