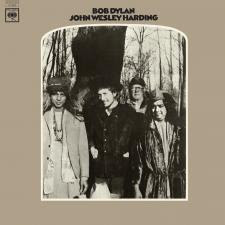 I have written, previously, about my mother's advice to avoid comparisons, since "comparisons are odious."That is what she always said!

Thinking more about that, I actually went back and did some reading about the little parable that apparently gave rise to this bit of wisdom. Poet John Lydgate (1370-1451), who was also a monk, conceived a poem that was based on a discussion between a horse, a goose, and a sheep. Out of that discussion came a conclusion that can be phrased in the negative - "comparisons are odious." However, the advisory might also be put into a more positive frame.

And what is the "positive" way of making the same point?

It turns out that Lydgate's observation has found a modern rephrasing in the poetry and song of Bob Dylan, and particularly in his song, "Dear Landlord." Click that link if you'd like to listen to the song. Here is one verse, quite meaningful to me, that provides an update, in a positive framework, for my mother's bit of wisdom from the early Fifteenth Century:

As we do go forward, into a time of parlous politics, we might also make reference to another favorite song of mine (this one from my father). We  are going to need a politics that will "accentuate the positive, eliminate the negative, latch on to the affirmative," and that "don't mess with Mister in Between."