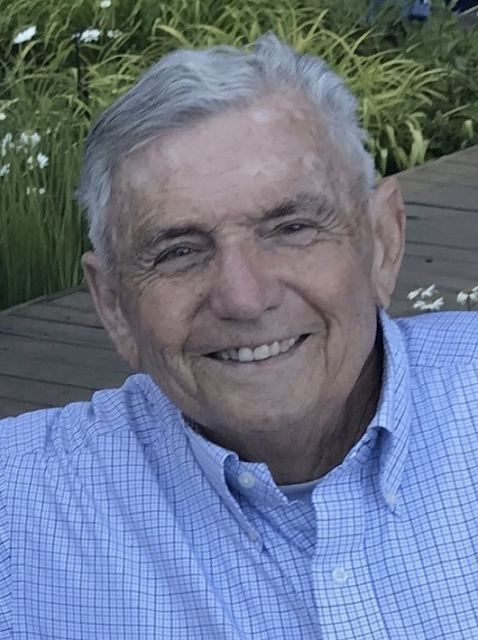 Jim Franks died on February 23, 2020. There was a very nice obituary in the Santa Cruz Sentinel, and that obituary has been republished on the Legacy.com website. The link I have just given you, above, will take you there.

You will find, from Jim's obituary, that Jim died here in Santa Cruz, in the very same house in which he was born. Pretty unusual! The obituary provides an extensive listing of Jim's children and grandchildren, too. If you wanted a quick snapshot phrase to synopsize this man's life, "Santa Cruz roots and shoots" might do just fine - at least as a phrase to get the conversation started. Santa Cruz "roots and shoots" there certainly are, and deep and wide they go. That phrase alone, however, is not nearly enough. It leaves out, for instance, the entanglements of Jim's service abroad for the State Department and his time in the Naval Reserve, and those are just a couple of the "for instance" cases.

On Saturday, March 7, 2020, a very lively and joyous celebration of Jim's life took place at the Star of the Sea Catholic Church. A taco truck was present before the service, parked right outside the Church, providing food to hungry people. As it turned out, there were tacos at the reception afterwards, too! Tacos at a memorial service? I don't think that's typical. That's the kind of thing that the Franks family does. Probably, Jim's wonderful wife, Marianne Franks, should get a lot of credit for the spirit of joy and celebration that infused the entire day!

The memorial service itself did include a full Catholic Mass, including communion - and with a special personal blessing made available, in lieu of the Host, for any non-Catholics in attendance who came to the altar and requested one. I obtained one of those blessings, and I think it did me good! There were also testimonials at the service (not to mention Bible readings) from children and grandchildren. A United States flag was presented by VFW Post 7263, in honor of Jim's military service. Offertory gifts symbolized the many aspects of Jim's life and personality, including his Native American heritage.

Jim's family had what amounted to a small farm in Santa Cruz, out on the Eastside, and some time ago a part of the family property was dedicated as a City Park, named in honor of Jim's older brother. Take your kids or grandkids there for a visit! It's lovely. I have put a picture below. The park wouldn't have been there, except for Jim. Another Jim, Jim Lang, former Director of the City Parks and Recreation Department, happened to be sitting right in front of me at the memorial service. You could ask Jim Lang about Jim Franks. He could tell you some pretty good stories, I'm pretty sure. The priest who presided over the services certainly told a few! 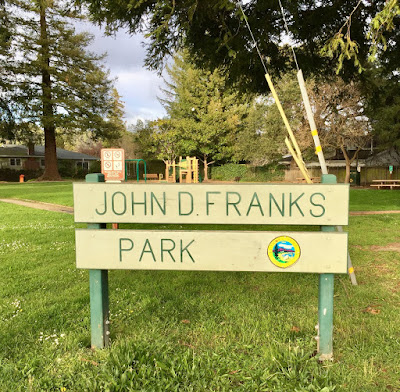 I came to Santa Cruz County in 1961, when my parents moved here from Palo Alto, bringing their children with them. I wasn't really around the community very much, though. I was mostly at college, and law school, and in Theological Seminary and in the Merchant Marine. I didn't really show up here until 1971, which is when my wife and I moved to the City of Santa Cruz, and I opened a law practice. Pretty promptly, I ran into Jim Franks, and Jim's family. The Franks were deeply committed to protecting the environment and the character and quality of this community, a community in which, as I have reported, they were, and are, profoundly rooted. I got involved in local politics, more or less by chance - it wasn't a plan - and this led to my connection with Jim and his family. I was pretty lucky, pretty blessed I would call it, in both of these things.

In many ways, I think it is correct to say that I learned about Santa Cruz, and how to prize and value it, from Jim and Marianne Franks, and from some of their closest friends. The Franks have deep roots, indeed, and they have helped, immeasurably, to hold this community in place. I was honored to have been able to represent the community for twenty years, as an elected official, and I was particularly and truly honored to know and to learn from Jim Franks.