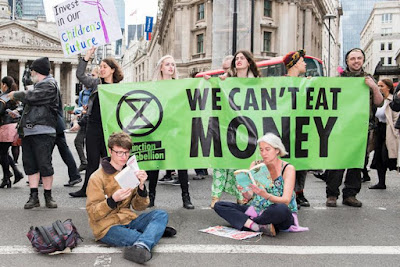 I am a fan of Extinction Rebellion (XR), which Wikipedia describes as "a global environmental movement with the stated aim of using nonviolent civil disobedience to compel government action to avoid tipping points in the climate system ... and the risk of social and ecological collapse." XR was established in the United Kingdom in May 2018. Click here for the XR website.

There is an XR group in my hometown, Santa Cruz, California, and I have attended one of its meetings and have spoken to some of the local organizers. The picture above shows an XR demonstration in Great Britain. The picture below is more for fun, but it did come to my attention because of a conversation I had with an anti-global warming activist during our local "Climate Strike" day in September.

What prompts this blog posting is not my thought that I should advise readers that there is an organization with which they may want to affiliate themselves - though that kind of advisory is certainly appropriate (even in view of the news story I mention below). Instead, I am reacting here to a story in the November 22, 2019, edition of The New York Times, which is headlined, online, as follows: "Extinction Rebellion Co-Founder Apologizes for Holocaust Remarks."

According to the article:

The founder, Roger Hallam, said in an interview with the German weekly Die Zeit that among various genocides that had occurred in previous centuries, the Holocaust, in which the Nazis killed millions of Jews during World War II, was not that unusual.

“The fact is that in our history, millions of people have been regularly killed under dire circumstances,” Mr. Hallam, who is British, said in excerpts published online on Wednesday. “To be honest, you could say: This is an almost normal event.”

I gather that Hallam was ultimately trying to advance the argument that what giant corporations and national governments are doing with respect to global warming is a world scale human disaster, and that he somehow thought that he could advance that argument by comparing that disaster to others, and specifically to the Holocaust. Hallam said that his intention was to elevate, not diminish, the horrific events that comprised the Holocaust, but that isn't how everyone heard what he said. He has apologized, but despite the apology there has been significant damage to XR as an organization.

I could not help but think, as I read this story, about the wisdom of what my mother frequently repeated to me, my brother, and my sisters:

When I first heard this from my mother, I didn't have any way to check the origins of this advice.  Now, of course, we can all do Internet searches and find that this piece of wisdom apparently originated in something said by John Lydgate in his Debate between the horse, goose, and sheep, circa 1440.

My attribution will continue to be to my mother, Alma Bracken Patton, circa 1950.

My mother knew what she was talking about, and that is advice that we all need to keep in mind. It is, perhaps, not least important to keep this advice in mind as we think about the current Democratic Party Presidential Primary.


If you find that your arguments are incorporating comparisons, slow down, rethink, and rephrase.

We are all in this life together, faced by many horrible dangers. Comparisons divide.

Let's not let ourselves fall into that trap! 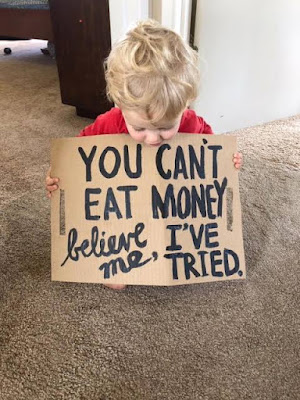