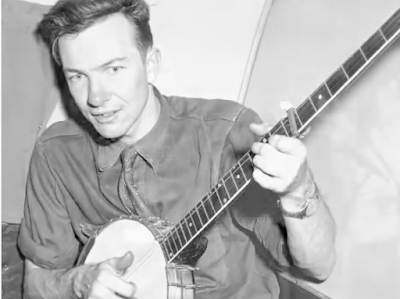 That's Pete Seeger, of course, pictured above, and if you click the link, you can hear Pete sing an old union song, "Which Side Are You On?" I have always loved that song, and above all because of my experience in politics.

Politics is, inevitably, about choosing between different alternatives. We each have to decide "which side we're on," when decision-making time rolls around. That is, by the way, a "feature," not a "bug."

We are all individuals, which means we have different ideas and different interests. That granted, it is even more important to recognize that we are, ultimately, together in this life. Because of that last fact, we will need to debate, and disagree, before we make decisions that affect us all. We need to work through conflict and controversy, and then decide how we are going to run our joint affairs, and who is going to act for us as we use the mechanisms of representative government to make collective choices about the future.

Tomorrow, of course, Californians are going to the polls to make some pretty important choices (if they haven't voted already, as so many have). On the national level, we will be helping to choose the Democratic Party candidate for president. It would be hard to overstate how important that decision will be for the future of the nation, and for the future of the world. If you believe Noam Chomsky, the choice we make in November will likely determine whether or not organized human life will continue on Earth. Personally, I am voting for Bernie Sanders. Maybe it's that "Not Me. Us" campaign slogan. That's where we need the emphasis now, in my view. We need to focus on the "Us."

On the local level, the recall elections in the City of Santa Cruz will also have some very important impacts. Santa Cruz is confronting an environment in which massive income inequality and pressures for local growth, coming from the Silicon Valley and from around the world, are putting the character and quality of our local community to the test.

I have previously used one of my daily blog postings to provide my thoughts on the recalls, and to outline what I think is at stake. You are definitely invited to refresh your recollection of my arguments, if you haven't already voted.

After I outlined my thoughts on the recalls, I heard from a few persons who disagreed with me. That, of course, is exactly what might be expected. I was, though, just a bit bemused to be referred to the website of a group called "Santa Cruz United" as the place to hear why those recalls are justified. I did consult the Santa Cruz United website, but I have remained unpersuaded that the alleged personal failings of a couple of Council Members is what is really driving this recall effort. Just as an observation, by the way, when a group tries to portray itself as representing a "united" community, I think we need to turn on our skepticism filters.

We are not united. No political community ever is. There are always some good, or at least plausible, arguments on all sides of any question, but "united" we are not. Never were. Never will be. After the debate and discussion - and remembering that there are definitely good arguments on all sides - we need to choose.

Choice is what democratic self-government is all about. In politics, like Pete Seeger says, the question is always this:

Which Side Are You On?