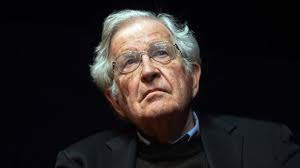 Noam Chomsky, who is pictured above, is ninety-one years old. Wikipedia identifies Chomsky as "an American linguist, philosopher, cognitive scientist, historian, social critic, and political activist." He is "the author of more than 100 books on topics such as linguistics, war, politics, and mass media."

I consider Chomsky to be an authentic "wise elder." You know, the kind of person who, in every culture and society, is able to speak the truth, as if not encumbered by the typical constraints of social discourse. Societies that disregard what their wise elders tell them are in for trouble!

On February 3, 2020, Truthout published a conversation between Chomsky and C.J. Polychroniou. Polychroniou is a political economist/political scientist who has taught and worked in universities and research centers in Europe and the United States. Here is something Chomsky said in this interview:

Has Trump committed vastly more serious crimes? That is hardly debatable. What might be debatable is whether he is indeed the most dangerous criminal in human history (which happens to be my personal view). Hitler had been perhaps the leading candidate for this honor. His goal was to rid the German-run world of Jews, Roma, homosexuals and other “deviants,” along with tens of millions of Slav “Untermenschen.” But Hitler was not dedicated with fervor to destroying the prospects of organized human life on Earth in the not-distant future (along with millions of other species).

Trump is. And those who think he doesn’t know what he’s doing haven’t been looking closely.

This Truthout interview (which I suggest you read in its entirety) began by an exploration of Chomsky's views on the impeachment of the president. Note that Chomsky quickly redirected the discussion to the consequences of global warming, calling Trump the "most dangerous criminal in human history" because (Chomsky believes) our president is deliberately seeking to destroy the prospects of organized human life on Earth. Take a moment to focus on that claim! That is an amazing claim, don't you think?

In essence, Chomsky is saying that our president is such a narcissist that he is unwilling for any other human to live, if he can't. Isn't that what the wise man is telling us? That's what I think. And it does make sense. As has been demonstrated time, and time again, Donald Trump will admit to no reality beyond himself. He can say what he wants; he can do what he wants. There are no constraints or limitations, either personal or political, which our president will acknowledge. This is the definition of a pathological narcissist.

So, is Chomsky right? Does our president really "know what he's doing?" Even if he doesn't, Chomsky is right about the consequences. He IS doing it. The president is promoting activities that will, without doubt, advance and accelerate global warming, and what happens in the next four years may very well determine whether organized human life on Earth will continue.

Societies that disregard what their wise elders tell them are in for trouble! And maybe it's even worse than that.

If Chomsky is right, our society, if it fails to heed this wise man's warning, is heading for elimination.