#328 / The Trophy Wife Syndrome (And Basketball)


The "trophy wife" syndrome is explained this way by Wikipedia:

The term trophy wife ... refers to a wife who is regarded as a status symbol for the husband ... A trophy wife is young and attractive (and usually a second, third or much later marriage), while the husband is often older and/or unattractive and usually wealthy. The term is ... used in a derogatory or disparaging way. ... Referring to a spouse as a trophy wife usually reflects negatively on the character or personality of both parties. For the husband, it has a connotation of pure narcissism ...

Pictured above are the two owners of the Golden State Warriors basketball team, Joe Lacob and Peter Gruber. Those who are following the Warriors will remember that Lacob and Gruber bought a team that was by no means distinguished, and then helped create a championship team which went to the NBA finals five times in five years. During those five years, "Warriors ball" was truly extraordinary, and the Warriors won the NBA championship three times. This was pretty impressive, and I am sure that Lacob and Gruber were quite proud of themselves, although the owners certainly had a lot of help from the Warriors Head Coach Steve Kerr and the extraordinary players who wore the Warriors' colors.

At any rate, as Warriors' fans know, once the Warriors started making serious basketball history, Lacob and Gruber decided to cut loose from the Oracle Arena, located in Oakland, California, where the team had played for forty-seven seasons. I have already commented, in an earlier blog posting, what I thought about that decision (I didn't like it). Instead of sticking with Oracle, Lacob and Gruber have built a major new sports and entertainment arena in San Francisco, the Chase Center. It glitters, no doubt. You can check it out, below: 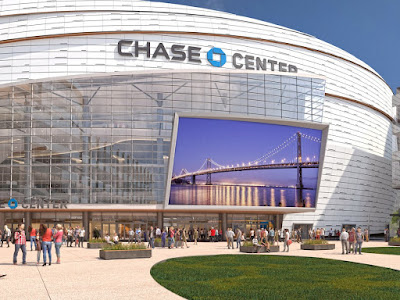 Of course, the Chase Center should glitter. It cost $1.4 billion. Part of the money to pay that bill will come, if Lacob and Gruber get their way, from money that they promised to pay the City of Oakland and Alameda County, when they bought the team. The deal was that if the team left Oracle before the taxpayer funded bonds that built it were paid off, the owners would pay off the bonds and not saddle the taxpayers with a big debt and no team. In fact, the owners have been refusing to pay, though they have had both a neutral arbitrator and a court tell them that they are obligated to do so. The  Editorial Board of the San Jose Mercury News has chided the owners, and told them they should "pay their debt."

By the midpoint of the fourth quarter, the vast majority of fans had filed toward the exits. Even the unbridled hope that accompanies each new season couldn’t cloud the fact that, in the wake of Kevin Durant’s departure for Brooklyn, the Warriors are a suddenly flawed team. They lack depth, proven defenders and, outside of a few holdovers from their dynastic five-year run, significant NBA experience.

Somehow, as I read about the "majority" of the fans walking out of the first game at the Chase Center,  way before the end of the game, I couldn't help but think that the Chase Center was, for these owners, the arena version of a "trophy wife." Having now been successful with the team, they jettison their old and faithful partner (Oracle),  and have picked up with a much more flashy, bright new bride. The result of that decision might actually be a bonafide "curse," or so opines Ben Cohen in The Wall Street Journal, commenting on the fact that the Warriors' best player, Steph Curry, broke his hand before even one week had elapsed in the new arena.

When I wrote about the decision to leaver Oracle earlier, I said it was the "end of the Warriors."