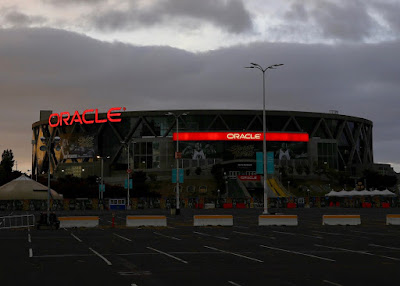 On Sunday, May 12, 2019, The New York Times spilled a lot of ink writing about the Golden State Warriors. The longest article (though not the only one) was titled, "For the Warriors, a Move Means the End of Something." The topic discussed was the decision by the owners of the team to abandon the Oracle Arena, in Oakland (pictured above), in order to relocate the team to the "Chase Center," which is located in San Francisco, and which is still under construction. Online, The Times' headline was transmogrified into the following: "The End of the Warriors as We Know Them."

I came rather late to the party as one of the Warriors' "Authentic Fans," but for the last several years I have followed the team with what might be called a kind of obsessive devotion. I watch every game! What caught my attention about the Warriors, as I casually watched a minute or two of one of the Warriors' games, several years ago, was the incredible "team" approach that the Warriors employed to win. They produced a slogan, "Strength in Numbers," which epitomized their novel approach. Everyone got to play and perform, and exceptional moments were to be expected, whether long three-point shots by Klay Thompson and Steph Curry, or amazing passes to someone suddenly all alone under the basket. Up until I happened to see the Warriors' play, completely by accident, I had probably only watched one or two baseball or football games in the last fifty years, and NO basketball games.

Unfortunately, I agree with The Times that this exceptional era, that captured even a sports-resistant person like me, is very likely coming to an end. I cite to the same cause identified by the newspaper - the decision to abandon Oakland:

The Warriors did not need to leave the grit of Oakland for the gloss of San Francisco. They chose to do so. Like most franchise leaps to new homes, it is a move borne of vanity, dressed as necessity.

An absence of "vanity" is exactly what I have loved about the Warriors, and even those who are not Biblical scholars have heard the words of Ecclesiastes 1:

Authentic Fans want an "authentic" team! I fear for the future of the Warriors, now that the owners of the team have cast aside the team's deeply rooted past, so that the owners can pursue (let's be honest)  ever bigger bucks and more personal profits. I fear The Times is right. This move is "the end of the Warriors as we know them." How much I am going to want to continue to be acquainted remains to be seen.