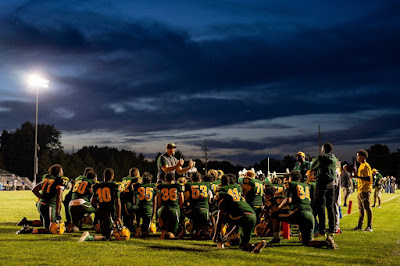 On Monday, September 23, 2019, The New York Times ran a story titled, "Poor Schools Keep Getting Crushed in Football. Is It Time to Level the Playing Field?"

Oligarchy is just a fact of life, the article suggests. At least that's the way I read it. Some are lucky to be "rich." Others are condemned to be "poor." High school students should start getting the message at an early age, and forget about the possibility that a "poor school" could ever beat a "rich school" in a football game.

No use making all those "poor" students feel bad.

As I understand it, the motivation to instill this class-differentiated separation in high school sports is being advanced, mainly, by the "poor schools." Frankly, the "rich schools" probably don't mind a bit trouncing their "poor school" rivals. Makes them feel just as entitled as they really are! From the "rich school" perspective, that's a life lesson worth teaching. Good to put that message out on both sides of the oligarchic divide. What is that message? The "rich" are supposed to (and do) win!

As anyone reading this posting can tell, I found The Times' story to be profoundly disturbing. I encourage you to read the story, if you can penetrate the paywall. While I do think that there needs to be a "level playing field," in high school sports, and in other areas of our national life (particularly our economy), I think that should mean we either "level up" or "level down." Level is where we should be. Incidentally, in case you haven't picked up on it, Bernie Sanders has been talking about "income inequality" for at least the past six years. The Occupy Movement raised the issue in 2015.

Should we have separate "rich school" and "poor school" leagues for high school sports? I am not in favor. I hate to see the trappings of oligarchy continue to extend themselves ever deeper into our national life!