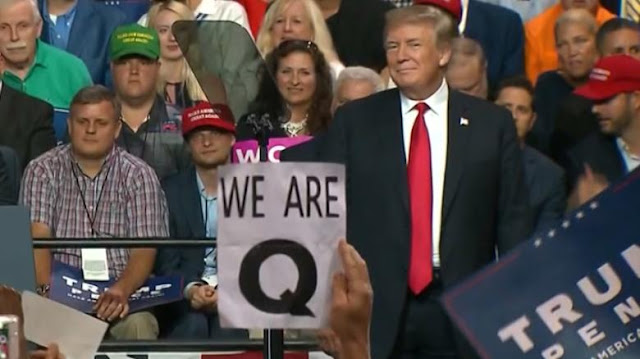 According to Chris Cillizza, CNN Editor-at-large, we should all be trying to learn as much as we can about QAnon. Frankly, I haven't been paying much attention. Cillizza says that QAnon is "the one conspiracy theory to rule them all." He says that we had better start taking it seriously. Click that link to get Cillizza's analysis.

Alyssa Rosenberg, who writes for The Washington Post, is also concerned about QAnon. The QAnon conspiracy theory apparently holds, among other things, that John F. Kennedy was not really assassinated but has been in hiding all these years, and will soon reappear to run in 2020 as a candidate for Vice President on the Trump ticket.

That seems weird and ridiculous, to me, but Rosenberg insists we need to take these ideas seriously:

It’s one thing to try to debunk QAnon and white-supremacist ideas, whether by trying to prove that John F. Kennedy Jr. is definitively dead or to combat demographic narratives of “replacement.” It’s quite another to figure out how to offer adherents of QAnon and other distorted worldviews experiences that will be as thrilling and fulfilling as conspiracy games have become. As View put it, we’re living not in a marketplace of ideas but in a “marketplace of realities.” And the tools of gaming have given disaffected people the ability to bend our reality to theirs, whether we like it or not.

Rosenberg's point, which I do think is worth some serious thought, is that the "video game" metaphor has invaded our way of thinking about thinking, and that since "thinking" leads to action, and action to real impacts in the real world, we need to start appreciating QAnon for what it is:

The best way to think of QAnon may be not as a conspiracy theory, but as an unusually absorbing alternate-reality game with extremely low barriers to entry. The “Q” poster’s cryptic missives give believers a task to complete on a semiregular basis. Even more so than conventional video games such as “Fortnite Battle Royale,” which rolls out new seasons with new scenarios roughly every 10 weeks, QAnon is open-ended — or it will be as long as the revelations continue ...

Once a person has started consuming QAnon content, the actual gameplay is relatively simple. Participants concoct their own interpretations of Q’s gnostic “bread crumbs,” or share those dreamed up by others.

If this were a conventional game, the play might end there. But QAnon players have shown an increasing tendency to enlist the rest of us as unwilling participants in their fantasies, sometimes with violent consequences.

As our interactions become ever more removed from a reality based in the physical world, "fantasy" can easily come to supplant what has traditionally been thought of as "reality." Suddenly, we find real people, with real guns, killing other real people at a Garlic Festival in Gilroy, California, or in public gatherings everywhere.

Here is what I think is most interesting about that phenomenon, as Rosenberg explains it. Our "traditional" realities are totally human-created, too, just like the fantasy worlds of video games. I mean this in the sense that "everything is possible" in the human world that we create. I'm back to the "two worlds hypothesis," as anyone who has read many of my blog postings can see.

Perhaps, I am thinking, it might be possible to use those "video realities" that many have started to believe are our "real" reality, to inform ourselves about the power of possibility in a more positive way.

Of course, that means we would have to start imagining, and then creating, realities different from the realities we see in most video games (and increasingly in the real world), where people with machine guns kill people, and win the game, and the war, and applause, and maybe even money, the more people they kill! 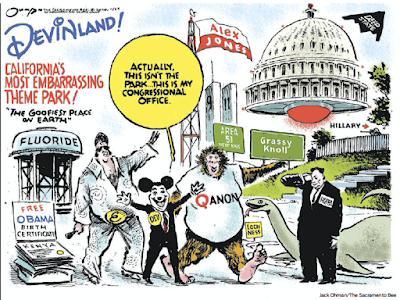