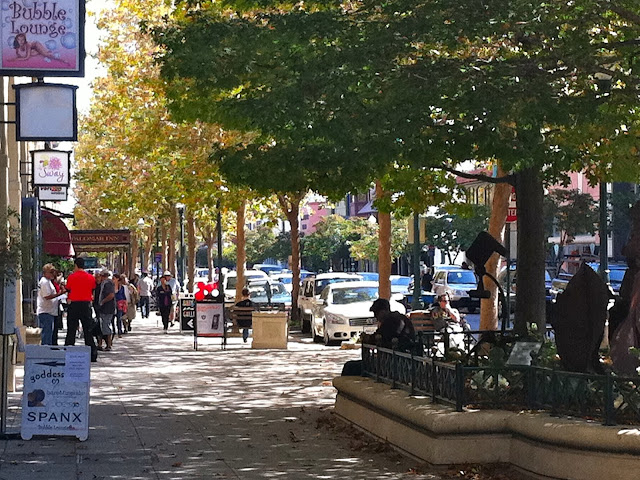 I have a Facebook page. I think if you click that link you'll get there. The picture above is not immediately visible on my Facebook page (not at the current time, anyway), but it has served, in the past, as my "Cover Photo." I love that picture, which I took myself. It shows a scene from downtown Santa Cruz, the town in which I live. I switch those Cover Photos around every once in awhile. Currently, my Facebook page features another photo that I love, a photo I took on the Great Barrier Reef, with black and white birds on the wing against turquoise waves.

At last look, I have something on the order of 3,000+ "Facebook Friends." Most of them come from around the Monterey Bay Region, or maybe from Sacramento. I don't know all my "Facebook Friends" personally, and the ones I do know personally are mostly not the kind of friends who are likely to invite me to their birthday parties or to drop in on me, unannounced, at dinner time.

That's fine with me, by the way!

I do have some other friends - they would want to be called my "real" friends - who are skeptical about my dedication to Facebook. And I would have to admit that I do spend a lot of time with Facebook. I post a lot of things on that Facebook page of mine, and I read a lot of what other people post. That takes time, and my "real" friends question my decision to spend so much time on Facebook. Also, those "real" friends believe that any kind of relationship based on the Internet is, inevitably, totally illusory. I don't agree, but they do have a point. "Real" relationships are not "viral" or "virtual." They involve flesh and blood in real physical contact.

There are also some real problems with the Facebook platform. I have studied some of those problems, which are serious, in connection with that course on "Privacy, Technology, And Freedom" that I teach at the University of California, Santa Cruz. One of those problems is Facebook's determination to vacuum up every shred of information about me that it can, which it then uses for its own dubious purposes, and which it essentially "sells" to those who want to try to persuade me to buy something - including persuading me to "buy" a particular political candidate. I have been told that our president, Donald Trump, is the largest single political purchaser of ads on Facebook. Information generated by my use of Facebook may, in a very real way, be providing him with the ability to influence people who have had some contact with my Facebook page.

In order to redeem our politics - the urgent task that I think must be our highest priority - we need to come together to take effective political action. We can't do that unless we believe in the reliability and the worth of "we the people." We need to have confidence that the people who live in our local communities, and in the state in which we reside, and in the United States of America - and even, it's important to acknowledge, in other countries - are in fact good, decent, caring, concerned, and intelligent people, just as we are. We need to trust that there are many, many "good" people out there, beyond the people we are lucky enough to know in person. If we don't have faith that this is true, our willingness to take political action, in concert with others, will be much diminished.

To confront the challenges we face - these are huge challenges - and to realize our opportunities, we need to find ways to act together. We can't even begin to try to do that if we don't think that there are others out there who will respond to the same concerns that motivate us. When we know that others, too, are wrestling with the problems with which we are wrestling, and are, in great good faith, trying to do right, and to make change, and to manifest love over hate, and reconciliation over division, then we might be able to gain enough confidence to be willing to step beyond our personal routines, and to make common cause with people we don't yet know, and to take the actions we need to take, together.

When I post my thoughts and concerns to my Facebook page, and when I then see what people think - when I see what others say themselves - I am encouraged. I am energized. I grow in confidence that those "Facebook Friends" out there are, in the end, very much like my "real" friends, and that together we will be able to do what we know needs to be done. I know that many are willing to "make a change," as Michael Jackson says. I know that the hour is coming, too, the one Bob Dylan talks about, below, and that my "Facebook Friends," like my "real" friends, are ready for that hour!