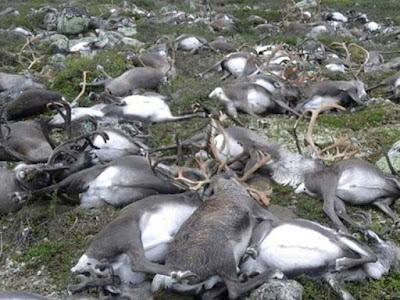 Let's be honest; the average American relates to reindeer only during a very brief period each year, as we contemplate those famous (and fictitious) reindeer that pull Santa's sleigh at Christmastime. How we love those reindeer! They are the ones responsible for delivering that deluge of consumer goods to treasure and/or to discard within days, hours, or minutes.

Surely, you know those reindeer by name: Dasher, Dancer, Prancer, Vixen, Comet, Cupid, Donner and Blitzen. And let's not forget that much-beloved "Rudolph, the red-nosed, reindeer!" He has been a favorite since 1939.

On the other hand, there are, in fact, real reindeer, too. The non-fictitious kind. Check out the picture at the top of this blog posting, and ask yourself a question: Why are these reindeer dead? The answer? They died of starvation.

Another question might he: why we should care? Here is one answer: we could all be next! The food supply of millions of human beings is vulnerable to shifts in climatic conditions.

Global warming is not fictitious. Neither are the climatic changes that global warming is causing. The article from which the picture is taken was published on July 27, 2019, and quoted researchers at the Norwegian Polar Institute in describing what happened. The New York Times covered the story on August 1, 2019. Both stories tell us that human existence depends on gifts bestowed not by fictional reindeer, but by climatic conditions that allow food to be grown to sustain the lives of real reindeer and humans alike.

Since global warming is human-caused, we should be honest about who is responsible for all those reindeer deaths.

As Michael Jackson might say: "Look in the mirror!"