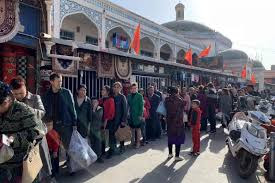 Depicted above is the Kashgar Bazaar in the Xinjiang region of China. In a recent article in The San Francisco Chronicle, Chris Buckley and Paul Mozur advised possible visitors that this historic marketplace is surrounded by a "virtual cage."

Developed and sold by the China Electronics Technology Corp., a state-run defense manufacturer, the system in Kashgar is on the cutting edge of what has become a flourishing new market for services and equipment that the government can use to monitor and subdue millions of Uighurs and members of other Muslim ethnic groups in Xinjiang.

Treating a city like a battlefield, the platform was designed to “apply the ideas of military cybersystems to civilian public security,” Wang Pengda, a CETC engineer, said in an official blog post. “Looking back, it truly was an idea ahead of its time.”

In the last month or so, I have been making postings to this blog warning that "war" is not really the right way to think about how best to address human problems. "War" is not the right metaphor. Most recently, I have contended that "War Doesn't Work."

China is not the only country that is rolling out the kind of high-tech "security" systems that are now surveilling the population of Xinjiang province. Both Great Britain and New York City are heading in exactly the same direction.

If we start treating our cities like they are "battlefields," then we are all the enemy!