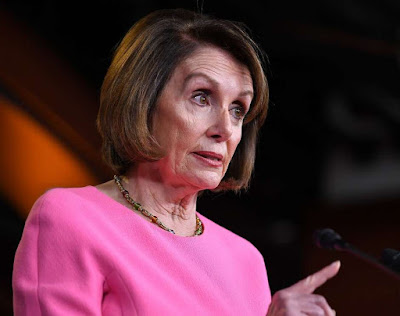 The San Francisco Chronicle is Nancy Pelosi's hometown paper. Generally speaking, the Chronicle strongly supports her positions. Not on Saturday, June 8, 2019, however.

On that date, the paper ran a short editorial statement with this headline: "Pelosi crosses the line with 'prison' comment." I am reprinting the entire statement, below, because I think it provides a warning to all of us. We are facing a politics that seems to be spinning out of control, and keeping "steady as she goes" is a political virtue not to be underestimated. Those who would like to return some basic decency to our national politics properly deplore calls to "Lock Her Up" (meaning Hillary Clinton). These are part of the standard agenda at rallies promoted by our current president, Donald Trump. The Chronicle suggests that those who feel this way should not be imitating him:

House Speaker Nancy Pelosi has been steadfastly strategic in her restraint amid a growing clamor within the Democratic ranks to begin impeachment proceedings. Pelosi has insisted “nothing is off the table,” but House committees should first proceed with their investigations and gather the evidence that could produce a “very compelling case to the American people.”

So it was disturbing to learn from Politico, citing “multiple sources,” that Pelosi told a group of senior Democrats, “I don’t want to see him impeached, I want to see him in prison.” There may or may not be a case for criminal prosecution after President Trump leaves office, but for the speaker to advocate for it out loud, even behind closed doors, undermines her efforts to keep the impeachment talk at bay. It’s hard to argue that a president who belongs in prison should stay in office for another minute.

Even worse is the notion — so cavalierly practiced under tin-pot dictatorships or expressed by the 45th president of the United States — that locking up one’s political opponents is an acceptable exercise of power. Let the congressional investigations proceed with vigor, fearlessness — and toned-down rhetoric.

What Diaz is saying, the way I read him, is that Trump is not a good role model, and that there is another way to get rid of that guy. It's called an election. Of course, not everyone agrees with Diaz, as a letter to the editor from Eleanor Fischbein, printed in today's Chronicle, makes clear.