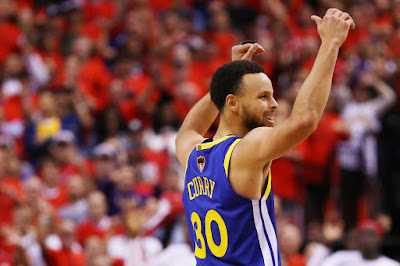 Fans of the Golden State Warriors, those "Authentic Fans" upon whom the Warriors most heavily rely, have undoubtedly been having a hard time during the NBA Finals. There has been a lot of spilled ink on what has been widely discussed, among other things, as a kind of disappointing and discouraging "moral collapse" by the NBA Champions - or, at least, that is how I would characterize it.

I, personally, have been disappointed by, and have bemoaned, the decision of the team's ownership to leave Oakland and Oracle Arena behind. During the finals, substantiating my own feelings that arrogant "rich guys" are running roughshod over what has always seemed to me, since I started following the team a few years ago, an amazingly inspirational and collective approach to basketball, it was revealed that the Warriors ownership group includes such rich guys as Mark Stevens, who was banned from future games because he used his courtside seat physically to push a member of the Toronto Raptors team, accompanying his physical assault with an insult.

Things have been somewhat disappointing and discouraging for Warriors fans, this incident being just one example. So, for any "Authentic Fans" who may be feeling either discouraged or disoriented, let me commend a column by sportswriter Ray Ratto, just published yesterday.

After discussing some specifics about how the Warriors have competed in the Finals, and after commenting on some of the feelings I mention above, Ratto talks about the challenges facing the Warriors on Thursday, and then again on Sunday, should the Warriors tie up the series in the Thursday game at Oracle. A Warriors' win, on either day, is far from certain. Smart money, in fact, would probably bet against the Warriors. More to the point, perhaps, whether the Warriors win or lose in the NBA Finals, what fans have been able to experience with the Warriors is probably coming to an end. Ratto really says that.

Nonetheless, Ratto has these encouraging words about the Warriors, as he contemplates the end:

They will either go out a champion or go out behaving like one.

It strikes me that this is not only a correct judgment about the Warriors, but also a kind of advisory to us all, basketball fans or not. It's a thought about how we should all understand and approach our own lives.

Whatever happens, they will go out behaving like champions.

I am hoping I can say the same about my own life, when it's time!