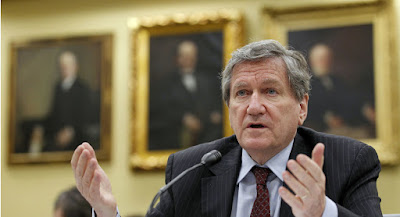 In the article from which I obtained the picture at the top of this blog posting, Politico Magazine called Richard Holbrooke "America's most talented diplomat." Holbrooke died in 2010, at age sixty-nine, and the Politico article indicates how much Politico believes that we are "missing" his advice and diplomatic efforts.

A recent book by George Packer, Our Man: Richard Holbrooke and the End of the American Century," is apparently also rather laudatory. Packer was a personal friend of Holbrooke, so you might expect his treatment of Holbrooke to be positive. Based on the book review by Jennifer Szalai, though, which ran in the May 9, 2019, edition of The New Yorks Times, there was a lot not to like about Holbrooke. Here is what I thought was the most telling part of Szalai's review:

Intentions seem to matter a lot to Packer — which might explain why, despite his moments of discomfort when writing about the more unseemly displays of Holbrooke’s grasping ambition, he wills himself into giving Holbrooke the benefit of the doubt.

There’s plenty of grasping to contend with, especially after Holbrooke started making money in the private sector between Democratic administrations, working as a consultant to companies like Nike and landing cushy gigs as an (ineffectual) investment banker. Holbrooke and his third wife, Marton, strategized the seating charts for their glitzy dinner parties as if they were drawing up battlefield plans; they obtained a sweetheart loan from Countrywide Financial — which later collapsed in the subprime mortgage crisis — to pay for several of their nine properties (including not one but two houses in Telluride); they both carried on affairs “in a class where affairs were practically expected,” with Holbrooke moving in to kiss a younger woman he worked with without waiting for her explicit consent. “He claimed her in the way of an entitled great man,” Packer writes.

Elite decadence doesn’t seem to be the story Packer set out to tell, but he’s too gifted a writer to fail to notice it (“A whole class of people in Washington and New York sent other people’s children to fight in Afghanistan and Iraq while they found ways to get rich”).

If you want another review of Packer's book, you might also look up what Walter Isaacson has to say about it in the Sunday, May 12th edition of The New York Times.

Full disclosure: I haven't read the book. Just the reviews. It looks to me, though, like Holbrooke was one of those "Davos Party" people mentioned in an earlier blog post. Sending "other people's children to fight in Afghanistan and Iraq while they ... get rich" does seem to warrant calling out this approach to diplomacy as "elite decadence." That's Szalai's bottom line.

I, for one, won't miss that brand of so-called "diplomacy" when it's finally gone!