Roger Cohen, writing in The New York Times, suggests that Joe Biden is a candidate committed to the "Party of Davos," which Cohen defines as "the network of elites whose economic and cultural prescriptions came to be seen by myriad voters across the United States and Europe as camouflage for a self-serving heist."

Our current president offered himself as a candidate in opposition to these elites (perfectly represented, on the Democratic Party side, by Hillary Clinton). Trump tricked the voters! But.... (and this is Cohen's point), the voters really did want to transfer leadership to someone who isn't beholden to the internationalist, elitist coterie that has taken control of our country's assets to wage interminable wars and to advance the interests of wealthy people everywhere. Trump was a "populist," right? Well, maybe the voters were not very clear what that meant in 2016.

In 2020, the voters will surely know a lot more about Donald Trump, and about how much of a "populist" he really is. While that should help make it possible to beat Trump, Cohen suggests that the voters still aren't enthusiastic about picking one of those elitists to run the country. They still want a "populist" candidate.

Cohen's column is worth reading. His point is worth thinking about. Is former Vice President Joe Biden really just a "slap 'em on the back" regular guy? Or, is he actually a member of the Davos Party? Let's hope it is not the latter, and....

While we think about that, and what it means for the upcoming election, we should remember that there is at least one genuine populist in the race, and here's a hint: 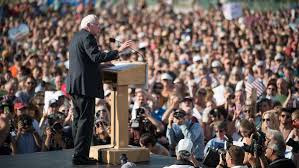