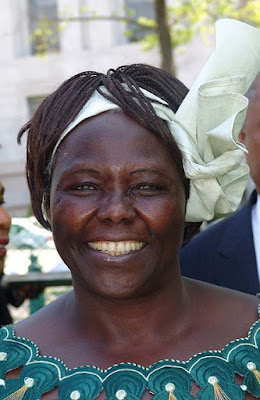 Wangarĩ Muta Maathai (1940 – 2011) was a renowned social, political, and environmental activist.  She was a Kenyan, but was educated in the United States. In 1977, Maathai founded the Green Belt Movement, a non-governmental organization focused on the planting of trees, environmental conservation, and women's rights. The organization is responsible for the planting of over 51 million trees. Maathai was the first African woman to win the Nobel laureate.

I started thinking about Maathai when I saw a recent Facebook posting, describing something similar: 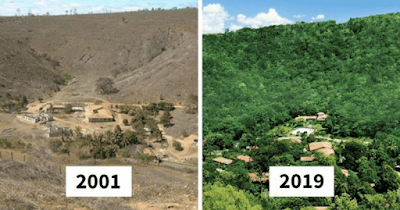 Brazilian photojournalist Sebastião Salgado and his wife are responsible for the transformation shown above. The story, reported initially in The Guardian, can be read in its entirety on the website Endo Riot. Here is a summary:

After covering the Rwandan genocide in the 1990s, Salgado came back to his home country only to see his deforested farmland in the state of Minas Gerais, 70 miles inland from Brazil’s Atlantic coast.

Salgado noticed that the Atlantic forest had shrunk almost 10% of its original size. With a motive to bring back the 1,502 acres of rainforest, he decided to start the Instituto Terra in 1998. The farmland that his parents had given him was all he needed to make a significant change for the environment.

“The land was as sick as I was – everything was destroyed. Only about 0.5% of the land was covered in trees. Then my wife had a fabulous idea to replant this forest. And when we began to do that, then all the insects and birds and fish returned and, thanks to this increase of the trees I, too, was reborn – this was the most important moment.”


Trying to reverse, or mitigate, the effects of human-caused global warming may be a "hopeless task," as some claim, but I think we should do what we can. It makes sense to me that we should organize ourselves to do exactly what Maathai and the Salgados have done.

As Salgado says, "There is a single being which can transform CO2 to oxygen, which is the tree. We need to replant the forest. You need forest with native trees, and you need to gather the seeds in the same region you plant them or the serpents and the termites won’t come. And if you plant forests that don’t belong, the animals don’t come there and the forest is silent."