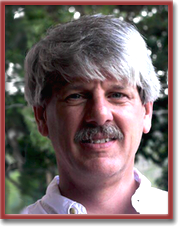 Last Saturday, Guy McPherson (pictured) came to my home town, Santa Cruz, California. He spoke at the Resource Center for Nonviolence, and his topic was advertised as "Abrupt Climate Change." Dr. McPherson's message was not a hopeful one. In fact, I think it is fair to say that McPherson is against any expression of "hope" when we consider global warming and climate change. It is McPherson's view that there is no hope for us, and that there is nothing we can do, at this point, to prevent the complete extinction of the human race.

McPherson says that it would be wrong for a doctor to tell a patient with a terminal disease that there may be "hope." That would be a lie. It isn't going to help. Similarly, it would be wrong for anyone who has studied the issue of climate change to tell people that there is any "hope" that we can do anything that will prevent the total extinction of all life on this planet, including, specifically, the extinction of human life. McPherson sees his job as trying to establish a "Planetary Hospice," to bring comfort to all of us during these last few years of our lives, which may well be over by 2030. If you click this link you will be able to read an article that makes the argument.

There was some reluctance in the audience to hear this message of absolute hopelessness. For instance, consternation was expressed when Dr. McPherson said that reducing the use of fossil fuels, which are putting greenhouse gases into the atmosphere, will not actually help us at all. It turns out, he says, that the particulates released by the combustion of hydrocarbon fuels (he called them aerosols) actually help reflect sunlight, and thus reduce global warming. Reducing hydrocarbon emissions will reduce the creation of those aerosols and thus actually speed up global warming, even though the emission of greenhouse gases may be reduced. As Dr. McPherson put it, where the burning of fossil fuels is concerned, "we are damned if we do; we are damned if we don't."

The part of Dr. McPherson's presentation that I liked best was a brief video illustrating the power of the exponential function. From 1975 to 1995, as I worked on the Santa Cruz County Board of Supervisors to fight the unconstrained growth then occurring in Santa Cruz County (and considered to be inevitable, by the way), I talked a lot about exponential growth. I referred to a great presentation by UCSC Emeritus Professor Peter Scott, "the bug in the bottle." Click on the link to read a blog posting of mine from 2010, summarizing Dr. Scott's illuminating discussion of the exponential function. My blog post mentions greenhouse gas emissions, incidentally.

The video that Dr. McPherson played takes a somewhat different tack, and is well worth watching. It makes the point very well. Once we put processes in motion that are governed by an exponential function, things can quickly get out of hand. The following video makes the point:

So, are things out of hand where global warming and climate change are concerned? I think so! I am not sold on the idea, however, that the best thing we can all do right now is to drop any effort to reduce our human contributions to global warming, and to turn the entire world into a "Planetary Hospice," so we can all take our time to give a proper goodbye to all those persons, places, and things we love. That is what Dr. McPherson is prescribing.

I prefer the prescription suggested by the School Strike 4 Climate and the Extinction Rebellion (both mentioned in my blog post yesterday). Whatever the future may be - and we should remember that "the future's not ours to see" (que sera, sera) - human activity aimed at revolutionary change will be a lot more satisfying than McPherson's admonition to get into "hospice mode," and to forget about preventing human extinction.

I do agree with Dr. McPherson that we should face the facts. I like what that Extinction Rebellion "Pink Boat" says: "Tell the Truth."

If we do tell ourselves the truth, we will not indulge in any false hopes that there isn't a deadly exponential process underway. We should acknowledge that the extincton of human life (and all life) is a real possibility. All that is true. However, without any false hopes whatsoever, it might actually be possible for us to change what we are doing in a way that could end up helping to reduce the coming age of climate change difficulties and disasters.

I am not ready, personally, to go into a planetary version of "hospice care." I prefer the idea that we ought to give revolutionary, nonviolent change a chance.

It's worth a try!