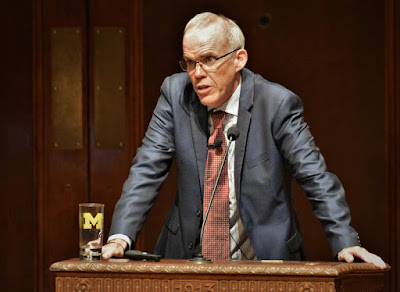 The End of Nature, by Bill McKibben, was published in 1989. McKibben's book was his effort to warn the world about global warming.

McKibben's latest book is called, Falter: Has the Human Game Begun to Play Itself Out? You might think of it as The End of Nature, plus thirty years. Here's what McKibben says about our current situation in a recent review in Scientific American:

When I wrote The End of Nature 30 years ago, my theory of change was simple. I was 27 years old; I thought people would read my book and then they would change. I now know that that's not the way change happens. Books and arguments are one part of what needs to happen, but I spend most of my time now building movements. I think those are what really will move the needle. I hope that this book contributes a little to that movement-building process.

But I also just want to mark where we are. Thirty years ago my greatest fear for climate change, in a way, was that we'd walk off this cliff without even recognizing it. I think now at least there's going to be a serious fight. And that is, at the very least, a more dignified way for humans to be engaging with this greatest of crises.

If you read my blog post yesterday, you will already know that I reject the suggestion by Guy McPherson that any action we take to confront global warming is absolutely doomed to fail, and that there is no "hope." Maybe that is true, but I concede to no statements of determinism. Checking into a "planetary hospice" just doesn't strike me as the kind of "dignified way" we ought to confront the situation in which we now find ourselves. I think McKibben is on the right track. I also think that Alexandria Ocasio-Cortez has the right idea, when she suggests that we should "imagine" that we can succeed.

What McKibben is calling "movement-building" is what I have often called "political engagement." What McKibben is really saying, and I agree, is that our personal political involvement is the only way we will be able to save the world.

So, if you are not ready for "hospice," you had better get "political" really, really soon!