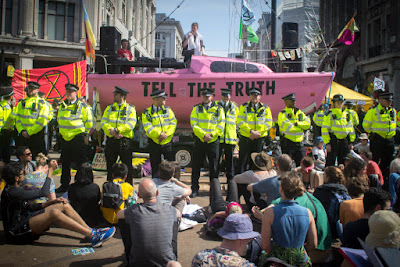 The picture above shows a protest in London, on April 19th. The headline on the article reads: "Police Turn Pirates: The Pink Boat is Lost." What you don't see in this picture is the huge crowd surrounding the boat. To get that view, click on the link!

Extinction Rebellion, a worldwide, nonviolent movement, sometimes called XR, consists of a popular mobilization against the continued failure of elected governments, almost everywhere, to confront the global warming crisis. The School Strike 4 Climate is doing much the same thing.

Let me suggest that Americans, in particular, should understand and support this movement as truly "revolutionary," since it is based on exactly the same concerns that motivated the American Revolution. Consider these words from our Declaration of Independence (emphasis added):

We hold these truths to be self-evident, that all men are created equal, that they are endowed by their Creator with certain unalienable Rights, that among these are Life, Liberty and the pursuit of Happiness.--That to secure these rights, Governments are instituted among Men, deriving their just powers from the consent of the governed, --That whenever any Form of Government becomes destructive of these ends, it is the Right of the People to alter or to abolish it, and to institute new Government, laying its foundation on such principles and organizing its powers in such form, as to them shall seem most likely to effect their Safety and Happiness. Prudence, indeed, will dictate that Governments long established should not be changed for light and transient causes; and accordingly all experience hath shewn, that mankind are more disposed to suffer, while evils are sufferable, than to right themselves by abolishing the forms to which they are accustomed. But when a long train of abuses and usurpations, pursuing invariably the same Object evinces a design to reduce them under absolute Despotism, it is their right, it is their duty, to throw off such Government, and to provide new Guards for their future security.


Governments around the world, including the United States government, have preserved and protected the powers of giant corporations (particularly the oil companies) as these corporations continue to plunder the Earth, and to undermine the stability of the Natural World that sustains all life. This behavior is, indubitably, "destructive." There is no question but that the activities of these corporations, and the actions of the governments that protect them, are a direct threat to both "safety and happiness."

In fact, the continued existence of human civilization has been put in peril by our collective failure to stop the use of fossil fuels. A continued commitment to the existing order, based on the use of fossil fuels, is leading to planetary level extinctions, and this conduct represents an absolute threat the continued viability of our human world. At some point, long suffering must come to an end, and governments that fail to protect life, liberty, and the pursuit of happiness must be replaced by governments that will.

Extinction Rebellion and the School Strike for Climate say that this moment has arrived.

In my judgment, "Telling The Truth" is always the first obligation of those who claim to be acting in the public interest. That pink boat may have been sequestered by the police, but the truth, itself, can never be "lost" as long as ordinary men and women are willing to testify to the truth, and to act  and to insist upon it.

Gandhi's nonviolent revolution was premised on that simple precept. "Clinging to the truth" can change the world!