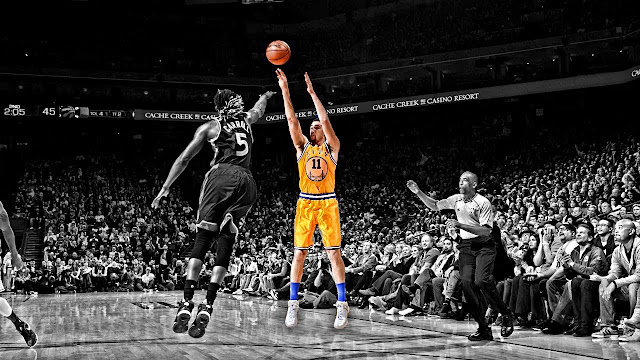 I am not much of a television watcher. However, I do show up in front of the television for Warriors' games, and I am planning to show up for all the final episodes of Game of Thrones.

On Saturday evening, in a game in which Klay Thompson was not his usual three-point self, making only one of six, I happened to call the one three-point shot he made. My wife, who agonizes each time the ball leaves a player's hands, wondered how I could have known that this shot was going to drop. Anticipating Sunday, when Game of Thrones returns, I proclaimed myself the "Three-Eyed Raven" of Warriors basketball. That is a dubious claim. I do, however, often call those long-shot three pointers correctly.

With basketball, it is all a matter of physics. Once launched, a three-point shot is either on the right trajectory, or not. You don't have to be an actual Three-Eyed Raven, a "greenseer," who is "all-seeing and all-knowing," to make a prediction that turns out to be true. In the physical world, the World of Nature, as I usually call it, inexorable laws determine what happens in the future.

Such is not the case in the human world. The conceit of Games of Thrones is that it is possible for those with special gifts to see, and thus accurately predict, the future. If you've got that gift, you can claim the title of "Three-Eyed Raven." In fact, however, in the human world, pronouncements about impending doom, or its opposite (it is mostly doom in Game of Thrones) are not properly received as statements of inevitability. Maybe in a television series, yes. In the "real" world in which we actually live, absolutely not.

I just read Bill McKibben's most recent thoughts about the impacts of global warming: "This Is How Human Extinction Could Play Out." It is a pretty convincing (and pretty discouraging) outline of what seems to be happening, and it comes across, to me, as a kind of "Three-Eyed Raven" type of pronouncement. Those with the gift of foresight can tell the future. That works for television. Not in real life.

As Hannah Arendt has reminded us, we have, each one of us, the gift of freedom, which means that we can always do something new, and unexpected, and something that has never been thought of or done before.

How often does that happen? Not very often. That's certainly true!

But revolutions can, in fact, substitute something completely new for a taken-for-granted current reality. Take, for example, the United States of America as an example of something very new in the world that suddenly appeared and could never have been predicted. Arendt's On Revolution will tell you all about it.

With all deference to those who suggest that they have Three-Eyed Raven-like powers of future discernment, I have this to say: "You could be right; if nothing changes." Once the ball has left Klay Thompson's hands, it's either headed in or out of the basket.

Not true for predictions about our human future. Not true because freedom. Because we can do more than simply watch the trajectory of the history in which we find ourselves bound up.

We can change it!