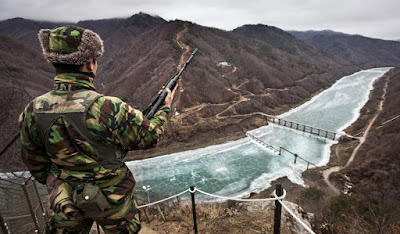 A play I saw at the Oregon Shakespeare Festival a couple of years ago, Hannah and the Dread Gazebo, came to mind as I was writing my blog post yesterday. The play itself was excellent (you can watch a brief excerpt by clicking this link); however, what struck me most about the play, and what I most remember, is a fact mentioned during the performance.

It turns out that the Demilitarized Zone between North and South Korea is now a wonderland of biodiversity. All that was required for biodiversity to return to this area was for human beings to get off the land. The DMZ is 160 miles long, and about 2.5 miles wide. If you venture into the DMZ, as you probably know, you will likely be killed by machine guns trained on you from both North and South Korea. Hence, human intrusions are rare. The result, as documented by an article in The Guardian, is that "the Demilitarized Zone, or DMZ, is home to thousands of species that are extinct or endangered elsewhere on the peninsula. It is the last haven for many of these plants and animals and the centre of attention for those intent on preserving Korea's rich ecological heritage."

If we would like to head in the "right direction," and start giving back territory to Nature, so that we can survive as a species (and this is what E.O. Wilson says we need to do), it looks like the DMZ provides a pretty good test case and proof of concept. We can, in fact, help restore the biodiversity we have put in peril by simply getting off the land, and leaving it alone. Machine guns might not actually be necessary! There are surely other ways to ensure that we can restore land to its natural state (by simply leaving it alone).

A recent story published on the EcoWatch website, indicates that we can start restoring our marine enviroments in the same fashion, by establishing marine sanctuaries. The article cites "a Greenpeace report [that] lays out a plan for how world leaders can protect more than 30 percent of the world's oceans in the next decade — as world governments meet at United Nations to create a historic Global Oceans Treaty aimed at strictly regulating activities which have damaged marine life."

There are lots of places where it would make sense for human beings to step back, and remove themselves and their activities. The results, in terms of biodiversity, could be astounding.

Hey, what about repurposing some of the thousands of military installations that the United States has established all over the world?